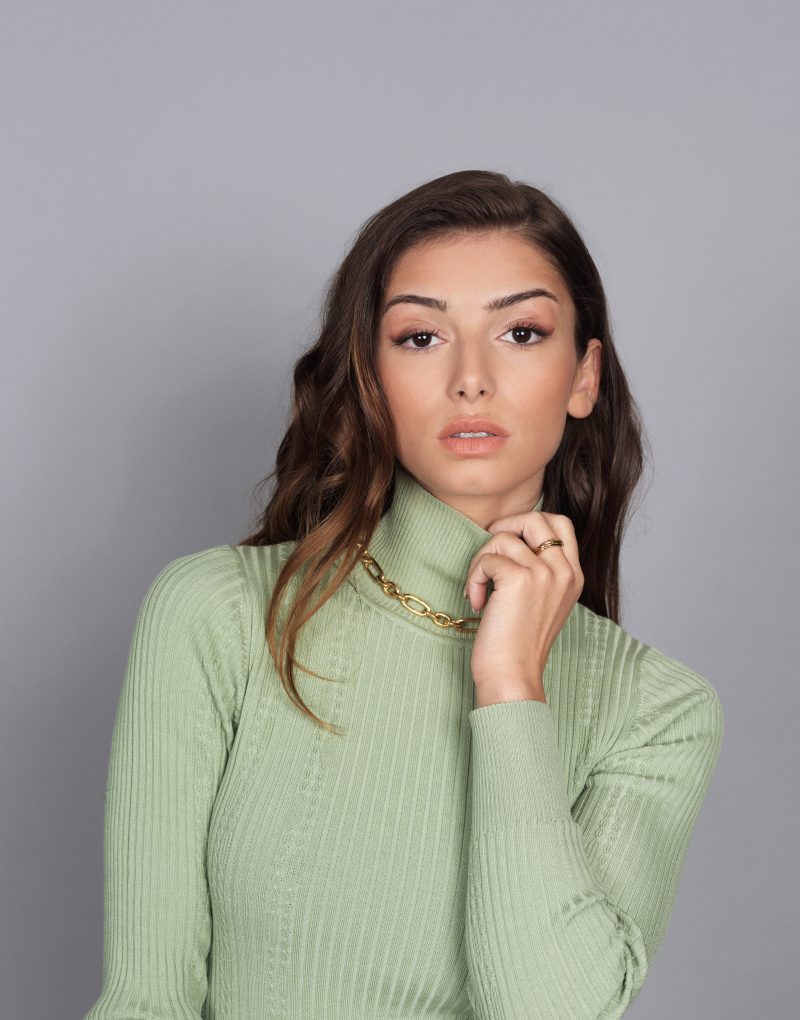 For the past three years, MIMI KEENE has played the de facto leader of The Untouchables, Ruby Matthews, opposite Asa Butterfield and Gillian Anderson in Netflix’s Sex Education.

We caught up with Mimi Keene to find out about what we can expect from the next chapter of this global hit series.

AC: What can audiences expect from the new season of Netflix’s Sex Education?

MIMI KEENE – I think that most of all you can expect a very different school this season. There’s quite a regressive atmosphere in the school. There’s a new headteacher at Moordale called Hope, played by Jemima Kirke. She’s really trying to turn the school around and strip Moordale of its reputation and kind of take away the school’s ethos in a way. In doing so, Hope is also taking away the individual identity of Moordale’s students too. That is something that is very much rebelled against as a lot of the students aren’t too happy about that. We have quite a few new students and we touch on some important topics that haven’t been addressed before.

Everyone knows that the aim of the show is to attack those taboo subjects head-on and to have those tricky conversations. For my character Ruby, I personally think we get to see a new side to her that I don’t think people have seen before and I was able to explore new storylines and further that character development. It’s a very different season, but I think people are really going to enjoy it.

AC: Can you give us any teasers on what might be in store for Ruby?

MIMI KEENE – In this season, Ruby gets to open up a lot more. It was really nice being able to expand her character and develop her into a more multi-dimensional role. She still has her harsh and confident and self-assured characteristics, because that’s part of who she is as a person, but I’ve been able to open her up a lot more and show her softer, more emotional side. Ruby’s family situation and home life is also something that is explored in this season. There’s a whole new storyline that centers around Ruby’s dad Roland, who, as we know from season 2 has MS, and the actor that plays Roland; David, also has MS. I think the authentic casting brings a lot to that storyline and I think will hopefully open a lot of eyes to MS and to young carers who have to care for their parents. Obviously, in terms of Ruby’s character, that shows a very different side to her as I would say that up until this season and this storyline, she hasn’t been a particularly caring character!

MIMI KEENE – There’s a particularly funny scene where Otis is being introduced into the untouchables, which in itself was just hilarious, and we definitely struggled to get through the scene in general. Otis’ initial exchanges with Anwar are hilarious, but the part of the scene that made me laugh the most was a bit involving a boiled egg. Chaneil, who plays Anwar, took it like a champ but basically, he had to eat this whole egg and we did the scene a fair few times so it ended up being 15 to 20 boiled eggs that he had to eat. He did swallow them, at first, which I was amazed at, but just imaging shoving a whole boiled egg into your mouth and chew it up whilst keeping a straight face. This scene, by the way, has been cut, so it was completely at Chaneil’s expense, but it was so worth it for my own personal entertainment because it was hilarious.

MIMI KEENE – Definitely. I think it’s probably the emotional scenes – they were the scenes I wanted to get right from the moment I read the script. I really wanted to show that side of Ruby, whilst not losing her other characteristics and the way that she is normally. I would say that retaining her harsh, self-assured, and very confident nature, whilst conveying essentially a young woman who is figuring herself out and starting a new relationship, who is also dealing with being a young carer and has to take on a lot of responsibility at home. Those two people are two very different characters and having to mix the two this season has certainly been challenging, but also incredibly rewarding.

AC: What has it been like filming in Wales?

MIMI KEENE – It’s been fantastic. I love the drive to Wales. I actually drive, everyone else would get the train and or come up in cars, but I love to be in my car, driving, by myself. I can drive for hours and hours and not get bored of it. I’ve got songs and snacks and my dogs with me – there’s nothing I enjoy more than that. When driving through Wales, I would usually go up quite late to avoid traffic, so it was a more relaxed experience doing it at night. I would always go the longer route through Gloucester where there are just lots of country lanes and you go through rural areas and get to see all the animals. That was one of my favourite bits actually – I’ve moved rabbits out of the road, I’ve moved hedgehogs out of the road. Also, being Wales, there are obviously loads of sheep. There are sheep everywhere – just walking down the road without a care in the world.

AC: Who is your favourite person to share a scene with on the show?

MIMI KEENE – This season it would have to be Asa because we had some fantastic scenes and we spent a lot of time together exploring this new relationship between Ruby and Otis. I couldn’t say just one scene was my favourite, but the ones I shot with Asa were brilliant – we really did have a ball this season.

AC: Do you have any Netflix binge tips for those who want to watch the show?

MIMI KEENE – Make sure that everything is ready – snacks, drinks, your watching buddy. Get everything prepared beforehand so that you can get stuck in. Preferably watch with nearby access to a toilet so you don’t waste too much time during toilet breaks. And start early! Every year when the show comes out, I get up and watch the season from start to finish in one day, but you HAVE to start early, otherwise, you get too tired.

MIMI KEENE – I think it’s hard to know what you’re still trying to learn as an actor. I think a lot of it is doing different jobs and playing different roles and being around other actors. I feel as though a lot of the time, throughout my career, I’ve picked up a lot from watching other actors doing their scenes and acting alongside other people. From a very young age, I found that acting alongside other people was the best way to learn and pick up things. I think I’ll always be trying to learn – I just don’t know specifically what it will be that I’m learning. It’s something you’re doing continuously throughout your career.

MIMI KEENE – I can tell because I read it quickly. I’m a slow reader – I’m very meticulous. Usually, the less I’m enjoying it, the slower I read. So if I fly through a script, I know it’s a good one. I flew through the first script I was given for the audition for Sex Education and that’s how I knew that it was something special.

MIMI KEENE – To be honest, social media has never been that important to me. I’ve never been very good at it. I’m getting better now at keeping people updated on what’s going on. I like it for finding out things – it’s great for weird facts and news and things like that. But I don’t know if I would say it was particularly important to me right now. I tend to dip in and out, but when I dip in, I do really enjoy it.

MIMI KEENE – Exciting things in the pipeline but nothing I can touch on just yet!

MIMI KEENE – Just being able to do different projects and play different characters. I’d really like to play characters that are completely different from what I’ve done before – as I said, I find that’s the best way to learn as an actor. The more I do different projects, the more I get to act alongside different people and learn new tips from them. So I would say I’m particularly excited to expand on what I’ve been doing. For me, it’s all about variety and variety in the parts I play and the projects I do.

Season 3 of Sex Education launches on Netflix on 17th September.