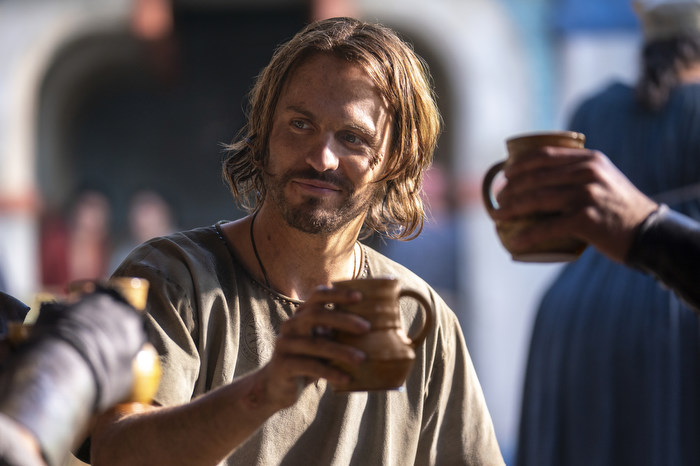 CHARLIE VICKERS is currently starring as Halbrand in The Lord of the Rings: The Rings of Power on Amazon Prime Video.

After graduating from the prestigious drama school, The Royal Central School of Speech and Drama, in 2017, Charlie has appeared in a number of projects including Netflix’s Medici: Masters of Florence opposite Sean Bean.

We caught up with Charlie Vickers to talk about his new role in The Lord of the Rings: The Rings of Power.

AC: What can audiences expect from The Lord of the Rings: The Rings of Power?

CHARLIE VICKERS – A vast and spectacular show that is also really heartfelt and has stories we can all relate to interwoven within it.

CHARLIE VICKERS – I don’t think I know the answer to that! I can say that he’s a man who is leaving his past behind him and heading towards what he hopes is a brighter future. On his journey, he meets other questions that make him question both his past and his future.

AC: As an actor, what are you still trying to learn?CHARLIE VICKERS – Everything! Each day presents new challenges and opportunities to learn. For me, it’s all about relaxation, so I’m constantly working on that.

CHARLIE VICKERS – Often when I love a script I’ll be reading and I’ll be halfway through before I realize it.

AC: What was it like working with J. A. Bayona?

CHARLIE VICKERS – JA was an amazing collaborator. He has such an amazing capacity to tell stories with the camera and it was a real pleasure to work with him. I learned a lot from being on set with him.

AC: When you’re working on a production with many moving pieces, how do you stay grounded?

CHARLIE VICKERS – I think by bringing myself back to the moment that I’m playing. In the end, regardless of the scale or size of what you’re working on, you are making second-by-second split decisions as the character.

AC: What was it like to shoot across so many amazing locations?

CHARLIE VICKERS – New Zealand was a wonderful place to work. The locations were spectacular and I had many moments when I would take a second to recognize how grateful I was to be able to work in such a magical country. The people of New Zealand looked after us and welcomed us wholeheartedly. It was an experience I’ll never forget.

AC: Did you get to keep any props from on-set?

CHARLIE VICKERS – I, unfortunately, didn’t! My coolest props were all quite big so sneaking them out would’ve been very challenging!

AC: What was the auditioning process like for this role?

CHARLIE VICKERS – My audition process was a very long one. I think I auditioned about 7 times over a period of 6 months. It was a stressful time, culminating in a screen test in Barcelona with JA. It was an experience I’ll never forget.

CHARLIE VICKERS – I always loved acting but I didn’t seriously consider it until I was in my early twenties. It wasn’t until I moved to the UK to go to drama school that I started to really believe I could have a career as an actor.

CHARLIE VICKERS – It’s not at all important to me at this point in my career. I think it would only add to my list of things to do if I started using it!

CHARLIE VICKERS – I think that having a sense of purpose in your life will keep you grounded amidst any madness that might come your way.

CHARLIE VICKERS – Thinking of old times with my friends and family.

The Lord of the Rings: The Rings of Power is now streaming on Amazon Prime Video.