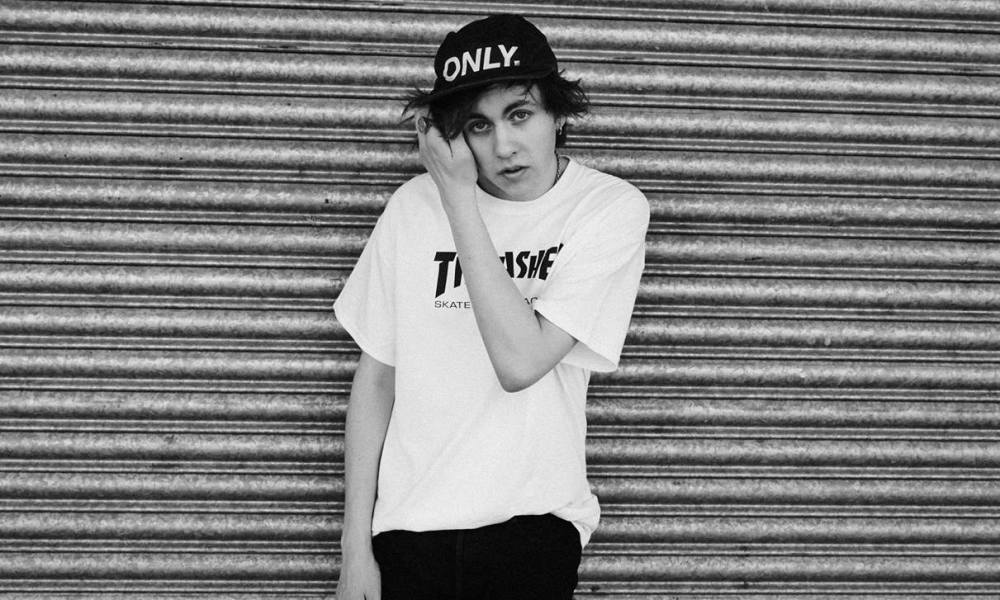 RAT BOY has just dropped the new seven-track EP Civil Disorder. This comes after the release of the songwriter’s debut album SCUM last year, which was followed by a sold-out UK tour.

AC: Where did the wrap on the scooter and car come from?

JORDAN CARDY: It’s actually not a wrap, my Dad painted it on there with masking tape. It was proper complicated, I don’t know how he did it. I think it took him three days. There were three colours, so he’d do one layer, wait for it to dry and then the next day mask up another one.

What other cars do you have?

I have a Ford Grenada Mark II with the roof cut off that we used in the Get Over It video. And we’ve got a speedboat with a Reliant Robin engine in it that my Dad also built for a music video.

You released your debut album SCUM last year, are there any songs on there that you think have been slightly overlooked?

I’m happy with how they all went. I like ‘Knock Knock’, that’s my favourite track on the album. It’s the one I’m most into style-wise, and I’m proud of the production. It’s got a bit of everything: it’s got the production, the punky energy and the beats.

What’s the quickest that you’ve ever finished making a song? What was the longest?

Everyday I wrote in like a night, I think. That was the quickest one on the album to make, but now I’m writing stuff a lot quicker. I feel like if I spend all night doing it, then I finish it. And if I leave it halfway through it takes like a month to get back into the zone. Get Over It took like six months.

Is it just original music for now, or are you looking to do any covers in the near future?

I want to do a little EP of covers soon, actually. I thought it would be cool to do some old punk songs. We did a cover of Babylon’s Burning a while ago, a Bad Brains song, maybe Six Pack by Black Flag too. Just a few bits like that but with different production to them. I’m really getting into that stuff at the moment. I really like the energy of it.

How much input do you have on the designs of The Holy Scum merch?

I do all the drawings and designs. Sometimes people help with putting it in different places – like sticking a drawing I’ve done on a hat or something – but it’s all me in terms of the drawings.

I listen to a lot of music on my phone because I’m always traveling. That way I can listen to anything by streaming. I do like vinyl though when you open one up and it’s got the art, but when you’re listening to music every day it’s easier on my phone.

But I’ve got a few weird vinyls that I like. I used to go to a lot of boot sales to pick them up. I’ve got a weird US pressing of Never Mind The Bollocks, which is a pink and green version. And I found an old record by The Damned – I think it’s their first one – that’s a first pressing. It’s all white and I got it for like a quid. I normally buy a lot of random records, like ones that have sci-fi front covers that I listen to for samples when I’m making beats.

Do you go into Wetherspoons much anymore?

I liked the Reading Festival and our last London gig at the Roundhouse. There was a lot of people at both of them with a lot of energy. My favourite thing was that everyone was jumping and you don’t need to be like, “Come on! Come on!” They were just doing it already, so I could focus on the songs. You’re not trying to hype everyone up, so you can just go mad on stage.

It’s well known that you have big role in making your own videos, what ideas have you had for past videos that never happened?

I come up with loads of random ideas, and people will be like, “That’s weird” or “You can’t do that.” The next video I want to do a house party with a Mad Max theme. There was a house party a few years ago called The Project X of Essex, so I wanted to reference that. It was a party that some girl threw. It went public on Facebook, a thousand kids turned up and they ruined the whole house. I think a floor caved in because there so many people in there. I think it caused something like £30,000 worth of damage.

Could those Ghostbusters outfits from the Halloween gig make a return?

That Halloween gig was fun, and the Ghostbusters outfits looked so sick. I think I’ve still got mine somewhere, but it had drinks thrown all over it.

What’s the strangest fan request you’ve ever got?

People often ask me to draw them guitars. Someone’s Dad asked me to paint a guitar for their daughter’s Christmas present. They sent it over, so I spent a whole day painting it and sent it back to them. That was pretty funny. Did I do it for free? Yeah, of course!

Your name on Twitter is ‘internationally unknown’, do you see international recognition as an ambition?

I don’t know. I’ve got a song that I wrote recently called Internationally Unknown. I’m excited to release it.

What can fans expect from the tour?

New songs, new clothing that I’ve made and a good vibe. I think it’s going to be our best tour with things like the new stage design, which we’re actually working on right now along with the backdrop. Brixton’s my biggest London show so I’m excited.

Will the scooter be coming with you guys?

There’s no room for the scooter. It doesn’t run and just takes up space.