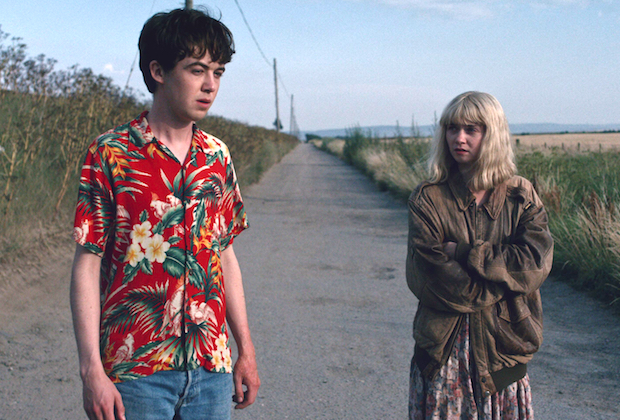 ALEX LAWTHER AND JESSICA BARDEN are a force to be reckoned with in the critically acclaimed Netflix comedy – The End Of The F***ing World.

AC: How did you initially react to the title of the project?

JESSICA BARDEN: I thought the title was really cool due to it being so shocking. I think it is the perfect title to represent the show, it tells you straight away that the show is going to be quite fearless.

Did you read the comic before filming? How long did it take you?

ALEX LAWTHER: I read Chuck’s comic in a day before one of the first readthroughs. But the world we were playing in was Charlie Covell’s, and to me her James and Alyssa live in a sort of parallel British universe to that, and I felt it made sense to put my attention on tell the story she had written above all.

JESSICA BARDEN: I was sent this script about 6 years ago, so I read the comics before they were put together as one whole book. I found some and also my friend had some as he has been a fan of the comics for years. I don’t find comics take me long to read which is why I like them.

What was your favourite line from the script?

ALEX LAWTHER: In Episode 6, at the petrol station. “It’s a Glock 17MB. Ambidextrous magazine catch. Recoil operated. 19 rounds.” And then knowing in Alyssa’s head, in her voiceover, she was responding with “Yes James!”, which Jess had written all over her face.

JESSICA BARDEN: I loved everything I have to say! Charlie is such a brilliant writer, every line was so well thought over by her but at the same time she somehow managed to make it throw away, I feel like this is very true to how young people speak. She created a rhythm with her dialogue on the page and those scripts are always my favourite ones to act.

What would your alternative title for the show be?

ALEX LAWTHER: “Not waving but drowning.” I think that sounds sort of catchy. It doesn’t have anything to do with the show, not really, other than poetically, maybe, but I love Stevie Smith and I think she’d get why Alyssa and James would steal a car and jump town.

JESSICA BARDEN: I think a good alternative title would be “Bye Marvin”.

Were there any improvisations?

ALEX LAWTHER: Not in the sense that we were making up lines as we went. There is a strict rhythm to this piece of Charlie’s writing, and if you start trying to naturalise it with ‘uhms’, and ‘ahs’, I found for me that messed it up. And James is not a man of many words. He seemed on paper, especially in the first half the series, to be allow himself to operate only in a painfully small box. A “yeah” or an “ok” is about as much as he can often muster.

THE END OF THE F***ING WORLD is streaming now on Netflix internationally.