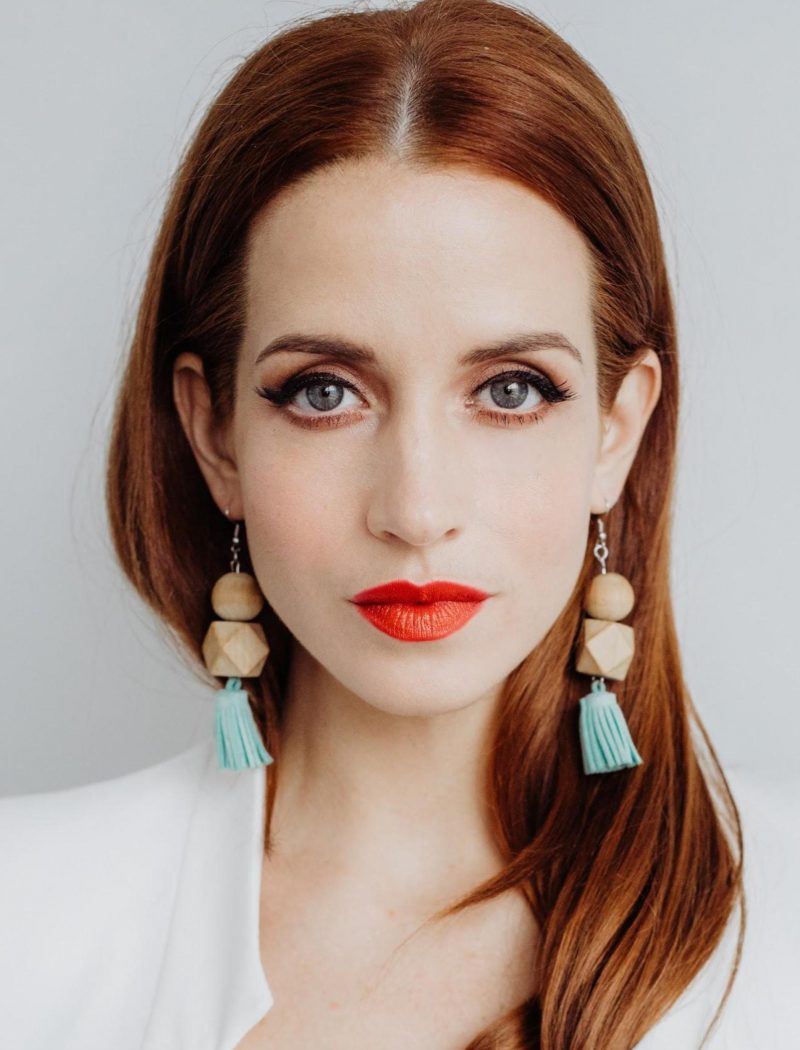 KIMBERLY-SUE MURRAY is currently as Danika in the new and highly-anticipated sci-fi horror series V-WARS on Netflix. The Toronto-based actress can be seen alongside Ian Sommerhalder in the show which follows the story of a scientist and his best friend as they face the evolving crisis of a deadly outbreak, potentially escalating to a future war between humans and vampires.

What can audiences expect from V-WARS?

KIMBERLY-SUE MURRAY: I think because Ian Somerhalder is leading this show the fans are expecting Vampire Diaries 2.0, but that’s so not the case. V-WARS is dark, it’s raw and it’s not for the faint of heart.

I play Danika Dubov, who is Michael Fayne’s love interest. That’s how she becomes exposed to the virus in the first place. She’s definitely part of Blood Nation, under Fayne’s leadership.

We’re all in survival mode, however, some of us have ulterior motives.

The fangs were all CGI, so on the day when I had to bite, our director would often say ask me to open my mouth wider, to show more gums so they could CGI the teeth in more easily. My jaw was popping so much!

Every time I had to kiss Adrian in a scene, my make-up would transfer onto him and his beard would go white. So we’d pause and the make-up team would run in to wipe his face. It takes a village!

If you were a vampire, what would be your survival strategy?

Team up with the biggest, baddest vampire for protection. And wear a tee-shirt that says #DefinitelyNotAVampire [laughs]. Have you seen the swag IDW Entertainment released?!

I sure am. I grew up watching Buffy, the Twilight saga and True Blood. I’m happy to be crossing Vampire off my list of roles to play.

Can you give us any teasers on what might be in store for Danika?

Mila. Mila is out to get her. I’d be really worried if I were Danika in RL.

I love the dynamic between Michael Fayne, Ava O’Malley and Danika. It’s electric.

Well, I’d sleep in, get up mid-afternoon, get my vampire face on (lots and lots of contouring) and then run around in the dark feeding on people. I had a blast!

I told my mom, who is determined to watch the whole thing in one sitting, to start early. Have some wine, chips and a comfortable seat.

To get out of my own way. Brad Turner, one of our awesome directors, came up to me before a take and said, “this isn’t about you.” And it wasn’t about me, or Danika, it was about the story. I lost track of the bigger picture and he snapped me out of it. I felt a huge weight lifted off my shoulders and then the scene unfolded naturally.

I was nine years old when I found out that acting was a career, something you could study and pursue. I made up my mind then and I never doubted it.

What was it like studying at Dawson College in Montreal?

The program at Dawson taught me discipline, how to fend for myself, and what not to do, but most importantly, it taught me about friendship and supporting your friends through the ups and downs of this industry. I’m very close to my girlfriends from theatre school. Shout out to Mikaela Davies, Amber Goldfarb, Catherine Bérubé and Sarah Booth. Love you, girls!

It’s more important than I want to admit. Unfortunately, social media equals eyeballs and that equals more work opportunities, especially here in Canada. No one will hire me unless my brand comes with a viewership. That being said, I’m very particular as to what I post and how I post. I love photography, so I curate a lot. I stay away from turning my account into a giant advertisement. I balance work posts with photos of my wonderful friends and family, my dog, my 35mm photography. So, yeah, I have rules for myself.

I would love a world without borders or discrimination, a sustainable and eco-friendly world. I want us to take responsibility and put our money where our mouths are. There’s a lot of preaching and very little doing right now, and I’m guilty of it too. My boyfriend and I just got a plug-in hybrid because we can’t afford an electric car yet, we’re also exploring veganism and trying to reduce our carbon footprint. I’m terrified of what we’re doing to our planet, but I still find myself going to H&M and buying mass-produced fashion when I’m sad. It’s a problem, but the change starts at home. I have a lot to learn still.

That’s so funny. My boyfriend is developing two apps and I’m always saying “how do you come up with these things?!” Jeez, if I had an app, I’d want to create a mentorship app. So, an app that connects experienced professionals with people who are just starting out in whatever field they’re in. Can someone make this app because I won’t, but I’d love to have it!

I would post before and after photos calling out retouching/face-tuning that happens on social media and in Hollywood. Young people are disillusioned, hell, I’m disillusioned. It would be a great reminder that perfection does not exist. Maybe we would love ourselves more and stop comparing ourselves to our neighbours.

Needing permission when I have an idea or when I want to try something out. I wish I could just do it without telling anyone about it.

Can you tell us about the work you’ve been doing with the WWF?

Yes, absolutely. I teamed up with my hair salon this year for the CN Tower Climb and raised money for WWF. It was an awesome experience. I’m also donating a percentage of my earnings from Heroes of the Shadow World Convention in NYC to WWF. I hope to keep doing that for as long as I can.

I’m just excited to go home for Christmas and be with my family. I don’t see them enough. I also haven’t seen my dog in a few months so I’m looking forward to a lot of snuggling by the fire.