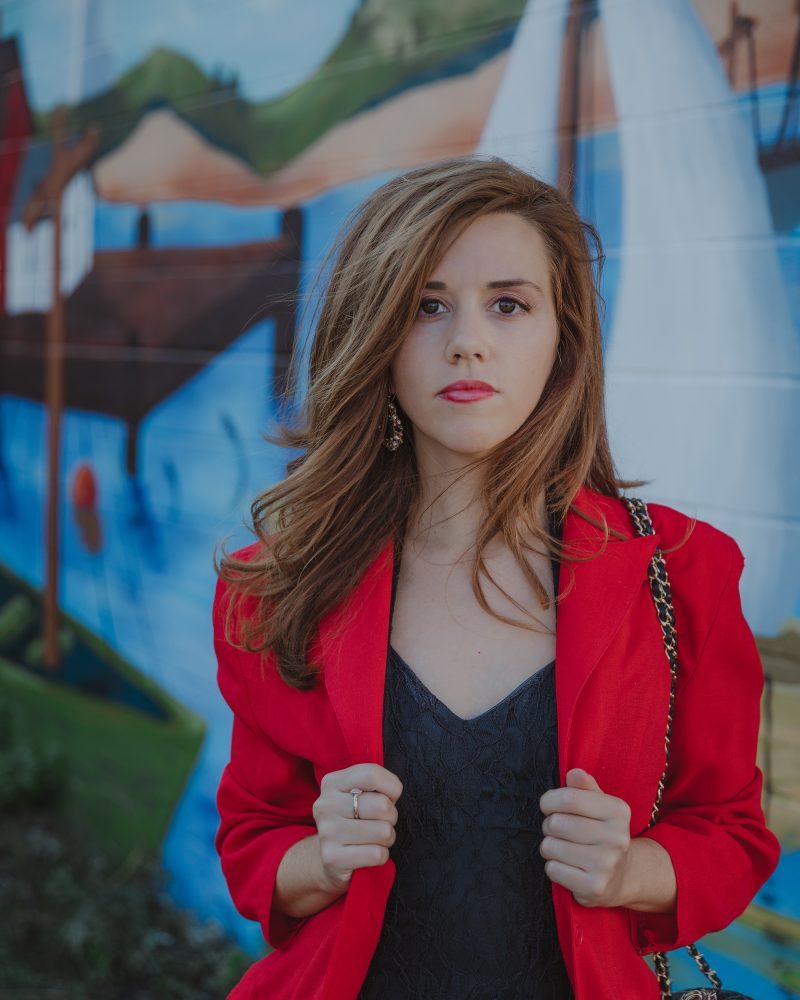 RUTH GOODWIN has reprised her role as Officer Danice Powers in the hit award-winning comedy-drama series Private Eyes on Global and Ion TV.

AC: What can audiences expect from the new season of Private Eyes?

RUTH GOODWIN – So much fun stuff! Shade and Angie have their hands full of new twisty, thrilling, and dangerous cases to solve and we get to see lots more about my character Danica and her personal life which was so much fun to film with Danica’s on-screen girlfriend, Kate, played by the fantastic Supinder Wraich.

RUTH GOODWIN – I think Danica’s goal is ultimately to do the right thing. I think she takes a lot of pride in her work but also recognizes flaws in the system she’s a part of, which is why she also throws out the rule book once in a while to help Shade and Angie. She’s good-hearted, ambitious and driven with the intention to serve and protect as best she can.

RUTH GOODWIN – Oh my yes. I mean there was the unprecedented huge snowstorm we had last November. We were supposed to be filming, I think like a picturesque day outside and Toronto got hit with the most snow it’s seen that early in the season, in 70 years. So we’re in the scene like “oh wow look at that beautiful sky” and it’s fully just a blizzard. It was hard to keep a straight face for sure. It was also freezing.

RUTH GOODWIN – Oh man, too many things to count. It’s funny to return to set after eight months of social isolation and just sort of have to remember the basics like how to memorize lines quickly and hit your marks. Whatever I think I had mastered before COVID has definitely needed a tune-up after the time off. But overall as an actor, I think you’re constantly learning a new trick that works for a while, until it doesn’t work AT ALL anymore and then you have to readjust. That’s part of the job description when you’re trying to tell present, alive stories. As soon as you stop learning and growing, your work becomes less alive I think.

RUTH GOODWIN – Usually you can tell right away.

RUTH GOODWIN – I always loved drama in school and I loved seeing plays growing up. But I think the first time I really thought I could pursue it professionally was in high school. I just couldn’t think of anything else I liked doing as much as acting so it seemed like a natural fit. It certainly wasn’t an easy decision, because it comes with so much uncertainty. I remember knowing though that if I didn’t give it a shot, I would never be able to see another play again without feeling a huge sense of regret or “what if?”.

RUTH GOODWIN – I don’t know, I have mixed feelings about the importance of social media. It can be a very toxic place and I don’t love how addicted I can get to it, but I also think social media has helped foster a lot of positive growth in the world. It’s been a great tool for political change and has strengthened activism like the BLM Movement and the MeToo Movement and helped give a voice to folks who, prior to social media, were flat out not heard by the mainstream media. In that way, I think it’s extremely important to me right now. But with the good comes the bad and there are certainly so many problematic things about social media that make me have to take breaks from it at times. So …yeah… it’s important and not important to me, depending on how it’s being used I suppose.

RUTH GOODWIN – Sign this NDA and I’ll tell you.

RUTH GOODWIN – The smell of any theatre.

RUTH GOODWIN – I’m excited for the time when we can return to the theatres, bars, restaurants, concerts, friends’ houses and public spaces that I miss a lot right now.