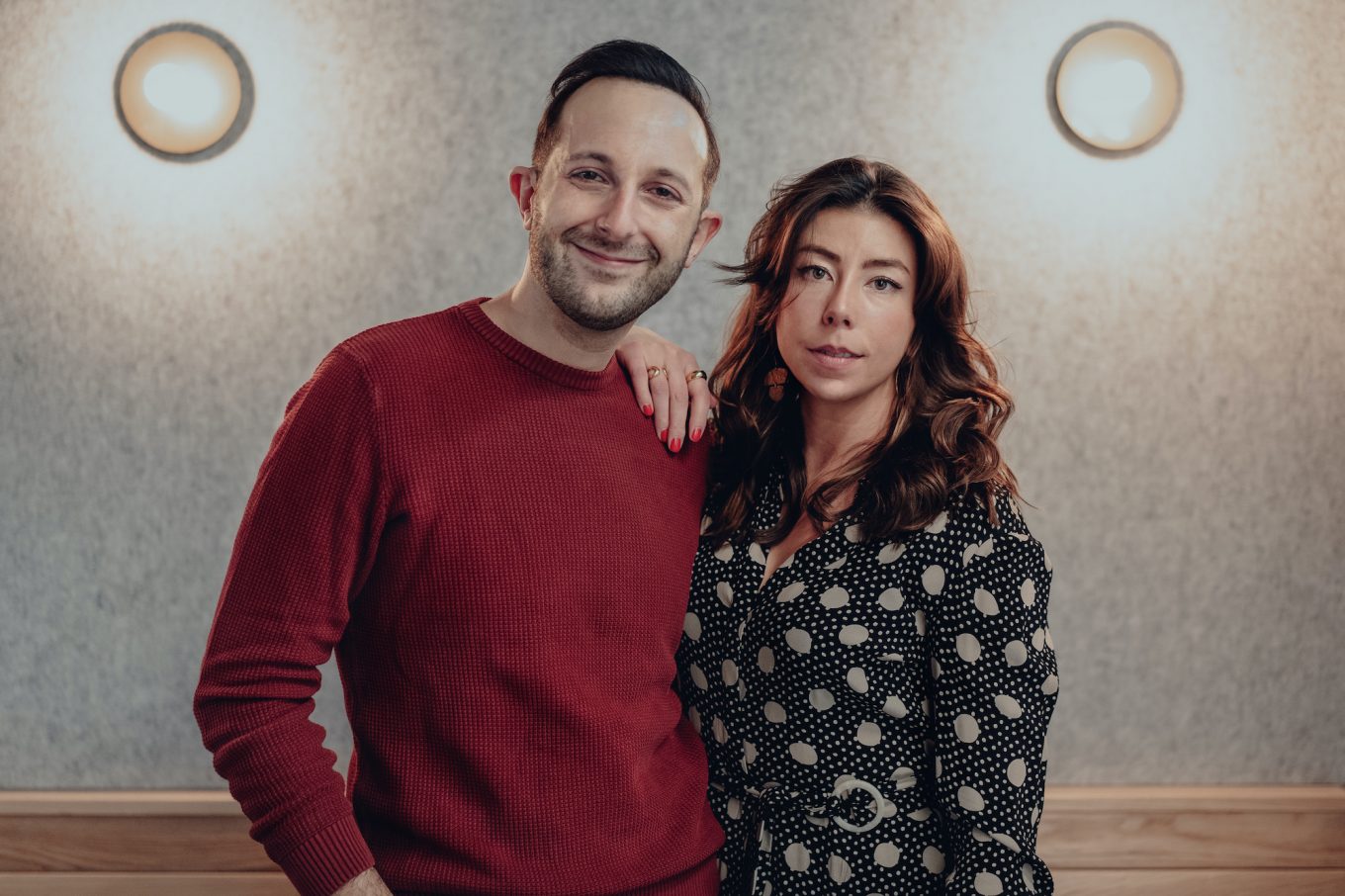 MADISON WALSH and MICHAEL MUSI can be seen in the new thriller series Something Undone on CBC Gem.

Jo, played by Madison, a foley artist, and her partner Farid, played by Michael, have made a name for themselves with their successful indie podcast chronicling true Canadian crimes. While Farid is away in Newfoundland investigating their newest story, Jo stays behind to record and edit the eerie sound effects needed.

When her estranged mother, Martha, dies at her family home in small-town Ontario, Jo arrives to pack up the house while continuing her foley work. As Jo recreates horrifying effects, she finds a disturbing sound in the background on one of her tracks.

This sets her off, desperate to uncover what happened in the house and who or what is trying to make a connection. Through the clues Jo finds in the house, the sounds she records, and tapes of her schizophrenic mother’s similar efforts to piece everything together, Jo is led down a path to a dark family secret.

AC: What can audiences expect from Something Undone?

MADISON WALSH: Something Undone is a unique take on the mystery genre. We explore sound to tell a story – using it to both pull the audience in and make their skin crawl with unease.

MICHAEL MUSI: Our audiences can expect an unsettling, chilling and entertaining experience.

MW: Jo is the protagonist. She comes to this old Victorian house in the middle of nowhere to sort out her dead mother’s things and record sound effects for her job. She is sidetracked, however, when she begins to hear things in the house that ultimately lead her towards a deeply hidden secret.

MM: Farid is Jo’s partner- both romantic and professional. He can often be the voice of reason for Jo and really tries to keep her grounded and stay on track.

MW: At first it’s simply to get everything done and dusted as soon as possible. As both the mystery and her buried grief start to grab hold of her, her purpose deepens; to uncover the truth no matter the cost.

MM: Farid is out in Newfoundland working at getting the podcast made on a tight deadline while also trying to be a support for Jo. As Jo falls deeper into the rabbit hole, uncovering her family’s secrets, it gets harder for Farid to support her.

MW: There were bats. We found a dead one hanging in the basement that our Locations woman had to put between two pie plates and drive to the dump. We also had a very alive and very vocal one in the attic who did not like sharing her space with us. It’s underrated fun to watch people’s reactions to bats.

MM: I’m so thankful I wasn’t in the basement for the bat moment. I laughed a lot when Maddy pretended to play piano.

MW: Among so many other things: to stay away from the Craft table. I spiked and crashed about 25 times a day from all the Reese’s Pieces I was eating.

MM: To forget about an audition when I leave the room. I obsess over everything and it will one day kill me.

MW: Dialogue is a huge giveaway for me. If a writer is observant enough to reflect the way we talk in a compelling and authentic way then she probably has something interesting to say. Originality has been really important to me lately – when a writer has the bravery to put something weird out there to challenge people and see if it sticks.

MM: When you can picture the world while you’re reading. When you can’t put the script down. When you think about it days later.

MW: I think the question is when did I begin to see acting as a potentially terrible career avenue. The annoying thing about most actors is that we have had the conviction we would be famous since we were five. Then there’s a moment shortly after you graduate from acting school when you see the reality of the numbers and you wonder if you should have stuck to architecture. You truly have to be pretty twisted to think you’re going to make it as an actor against all those odds. But if you really love it and can’t give it up – the sooner you realize that you have to make your own work, the better. Mike and I only just had this enlightenment and I think we’re still in denial.

MM: Haha, yeah I still don’t really think of it as a potential career avenue. I’ve been lucky to make a living as an actor/writer/producer for the last 5 years now and I’m constantly terrified it will be taken away from me.

MW: Oh boy. I’d like to see more women leaders in government, business, and the arts. While we’ve come a long way for sure but let’s not settle. The voices of women of colour in particular have not been heard enough.

MM: I want the world to be more fair. Equal opportunities for women and people of colour.

MW: It’s a love-hate relationship, let me tell you. On one hand, I am connected to the world and have a platform to promote my show to an audience that I’d otherwise never have. I also love memes. On the other hand, it’s numbing and nauseating and inauthentic and can feel like a bad k-hole of shame.

MM: I kind of hate it. Maddy sends me so many memes and sometimes they’re really funny and other times I can tell she’s just procrastinating. It is lovely to connect with family and fans of our work but I end up spending way too much time on it doing absolutely nothing.

MW: Creating a void allows it to be filled. Despite the devastation of the pandemic, the world has found ways to create and connect and the content I’m seeing is just getting better and better.

MM: Therapy is amazing and everyone should get a therapist.

MW: Food roulette. Randomly pitting different local restaurants against each other as you narrow down the endless choices for dinner. Kind of like Zuckerberg’s heinous Hot or Not game – but for gyros vs. bolognese. Actually, Mike does this for me whenever we get takeout.

MM: I also have a food app idea!  One that lets you take a picture of inside your fridge and then it pulls up a bunch of recipes using ingredients you already have.

MW: Being in a packed, dark theatre, right before the curtain rises, not knowing what’s in store for you.

MW: In the near future I’m hoping my Bluetooth will one day connect on the first try. That’d be cool.

MM: I’m excited to not travel with 4 reusable masks and a bottle of hand sanitizer.