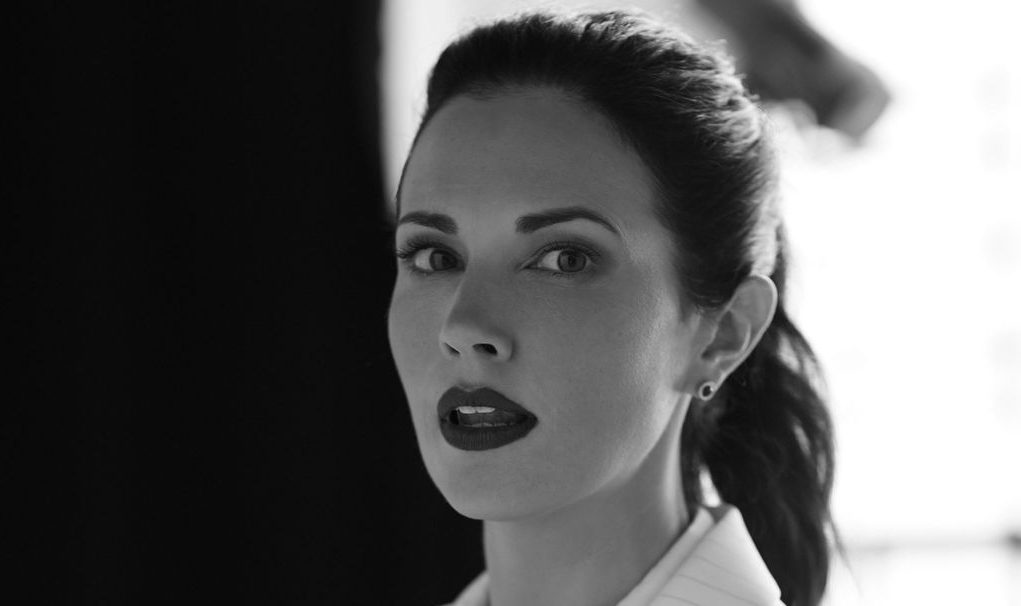 LAURA MENNELL has been leaving her mark in a slew of diverse projects across genres. Laura can currently be seen in the third season of Amazon’s Emmy winning series, The Man in the High Castle, as Thelma Harris, a New York gossip columnist. She has also returned for the second season of comedy series Loudermilk on Audience Network, opposite Ron Livingston.

Since January, Laura has been starring as Mimi Hynek opposite Aiden Gillen in the History Channel’s new series, Project Blue Book. The series revolves around secret U.S. Air Force investigations into supposed UFO encounters and unexplained phenomenon, undertaken by astrophysicist, and eventual ufologist, Josef Allen Hynek in the 1950s and 1960s.

AC: In the past six months, you’ve starred in three very different shows. Which role would you say you’ve found the most demanding?

LAURA MENNELL: Yeah, you’re right. All three shows I’ve been involved in are extremely different. I played the girl next door on Loudermilk, A Nazi gossip columnist for the Reich in Man In The High Castle and now the wife to renowned ufologist from the 1950s and 60s – Allen Hynek (Aidan Gillen) – for Project Blue Book. I was ecstatic to be part of all three shows, but for me Blue Book was definitely the most demanding because I was heavily involved as one of the series leads on the show. And also my character, Mimi Hynek, gave me a lot of interesting challenges to work with this season. One thing I love about playing Mimi, is that unlike other shows that centre around famous historical men, Mimi’s role isn’t simply that of the supportive housewife. And although her ark is obviously intertwined with Allen’s , she also has her own interesting storyline playing throughout this season. She has a new friendship she develops with a woman called Susie (Ksenia Solo). Susie and Mimi’s relationship is really quite complex, they develop a strong emotional intimacy. As Mimi’s relationship with Allen becomes strained — he becomes more and more secretive with his classified job for the US Air Force – Susie is there for Mimi. And the women’s relationship unfolds in a surprising way and with high stakes involved for both women in their separate lives. Their journey is adventurous, fun, mysterious, dark, dangerous and poignant. I get to play with all sorts of things this season.

With your new series Project Blue Book being based around a real-life study on UFOs – there must of been heaps of research material available. What kind of research did you do for the role?

Since our show starts off in the 50s and is about Project Blue Book‘s once classified UFO cases, it was really exciting and fun to prepare for in many ways. First of all, there is so much out there on Allen Hynek and I loved learning about him and his world from readings like Close Encounters Man and even watching Stephen Spielberg’s Close Encounters of The Third Kind which he was a consultant for, there was just so much out there.

And both Aidan and I were lucky enough to get to connect with Paul and Joel (the Hynek’s sons) – who also happen to be producing consultants on the show. This was particularly helpful for me as a jumping off point, since there’s not much information available to the public on Mimi. So I got the learn about her through family photos and stories they shared which was really helpful. Paul also connected me to his older sister Roxanne at one point. And I had a really lovely conversation with her as well. It was really surreal being in contact with your character’s real life children who are now all grown up.

Also, researching what it meant to be a woman in the 50s was fascinating. Specifically, I started watching educational films created for young women at the time that taught them how to be “perfect wives” to their husbands. The movies were really sweet and cute at first glance, but became really frustrating from a modern day woman’s perspective — they all had the common theme of learning to please their man by sacrificing their own personal needs. The films made me wince quite a bit, but gave me an understanding of where Mimi might have been coming from. She starts off feeling a little stagnant in her domestic role at home and despite loving her family, she feels like she’s missing something. This season, Allen’s job with Project Blue Book shakes things up in the Hynek home, Mimi is forced to find her inner strength as she deals with the challenges she finds herself in.

Have you ever experienced a close encounter?

I might very well have. I was with my boyfriend in the summer looking up at the sky and saw this light that was bigger than a planet. It wasn’t blinking like the usual aircrafts one might see at night and there was no sounds of jet engines. It was flying in our direction for a a short time, then just seemed to stop in mid-air for at least ten minutes. It was bizarre. Who knows, maybe it was something out of the ordinary, but I guess I’ll never really know for sure. Our show definitely has me looking up at the sky differently now.

Has working on the series changed any opinions you’ve held about those who believe in aliens?

I’ve definitely become more and more open to the the belief of other life forms being out there in the universe. It’s hard not to, after learning about all these once classified cases in our show. Blue Book really does explore one of the greatest mysteries of our time – ‘Is there intelligent life out there other than ourselves?’ – and I say it presents a really strong case for that. Allen Hynek was a real truth seeker and I think there’s a bit of that in all of us. And Hynek was such a brilliant man who came at these investigations with the goal to find scientific explanations to explain these sightings. Nonetheless, he did realize not everything could be fully explained and became a believer in UFO phenomena. And that’s why sceptics and believers will be drawn to this show, searching for answers… and many of skeptics might change the way they feel. I know I am much more open-minded about the whole subject than I was to begin with. I find it fascinating and I know audiences will too. 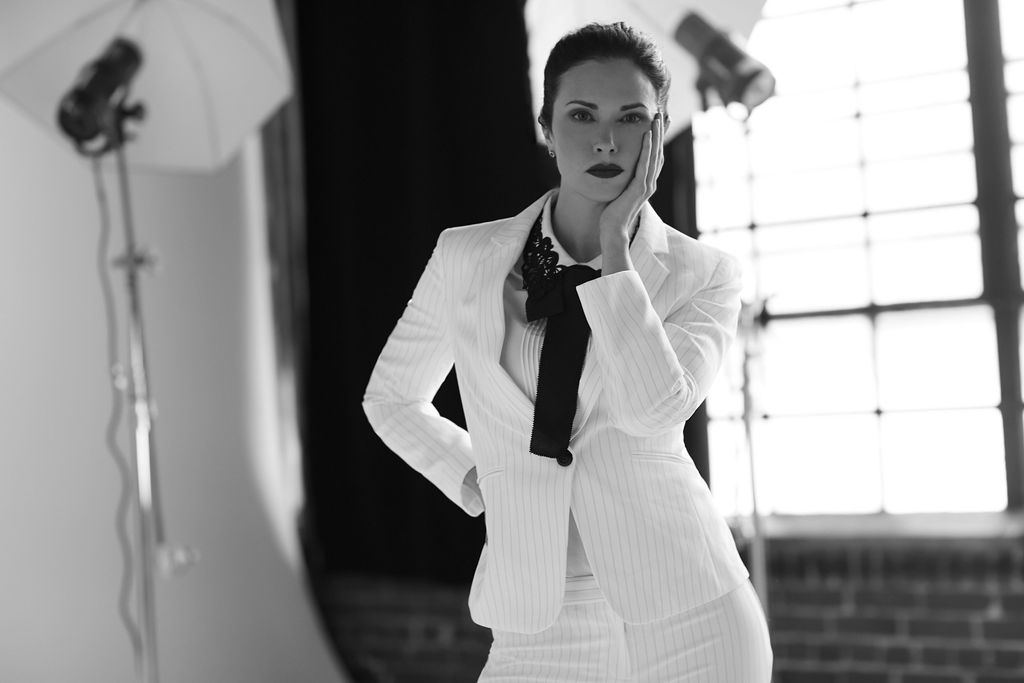 Aidan Gillen is a really lovely guy and is perfectly cast as Allen Hynek. I must say, I couldn’t watch him in ‘Game Of Thrones’ before or during the shooting of our show. I didn’t want to be thinking of Little Finger as being my husband, that would probably freak me out just as little bit. But Aidan is a really genuinely good guy, who’s real life intelligence plays effortlessly into his role as Hynek. I loved getting to work with him, watching him naturally allow his performances to build and shift from moment to moment with each take. He was wonderful to work off of and I was so happy to be playing his wife — as a couple they definitely have some obstacles to work through this season, but I was glad to be working through those challenges with such a fantastic actor.

The funny ones I’m thinking about, sadly come with too many spoilers for the top of the season. But I can think of a funny, or maybe more of a fun, connection while shooting: Nicholas Holmes who plays Joel Hynek, my TV son, happens to be the real life kid to my older sister’s ex-boyfriend from decades ago! And his lovely wife is also an actor who I’ve crossed paths with on shows like The 4400 and My New Best Friend, but I never knew the connection when we worked together. It’s a small world – where my sister’s ex-boyfriend’s real life son is now my TV son – plus he’s a great little actor. How great is that!? Who would have thought?!

What makes Vancouver such a great filming location for shows?

First of all, Vancouver BC is such a popular shooting destination because the crews are fantastic! There was a huge filming boom out here that started in the 80s with shows like 21 Jump Street and MacGyver. Since then, it’s become a well established and amazing film community and Project Blue Book is also a testament to that same quality in our crew. Our show is really quite beautiful and cinematic looking. And Vancouver is also such a phenomenal location for Project Blue Book because it’s such a rainy and grey city — it helps set this noir-esque tone for the season. It wouldn’t have had that same moody and eerie feel if we shot somewhere else —like if we shot in sunny LA we’d definitely lose that!

We’re at the start of a new year. As you move from one acting role to the next, what are you still trying to learn?

My job is never stagnant, it’s constantly changing, bringing all sort’s of new energy to my life. I’m always learning something new, as I learn about my characters, I can start to connect with a deeper understanding of who I am from different life experiences. Looking back at my experiences, certain roles can bring up connections with old memories that teach you about yourself in a new way. I’d like to simply go further with that and keep going to new places with my work. I don’t know exactly where it’ll take me, but I’m okay with that. I find it’s better not to have expectations of outcomes, take things as they come, embracing whatever happens and running with it. I look forward to steadily going forward and simply being present in the moment.