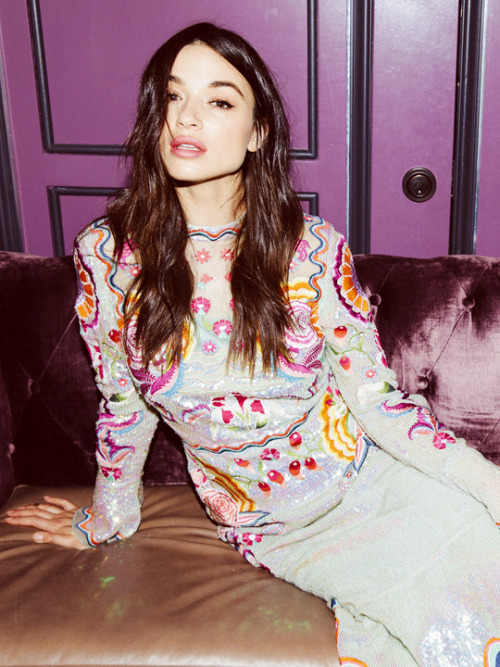 Once leading the pack in the hottest show on television – Teen Wolf, CRYSTAL REED has made the jump to comic-book territory, with a villainous main role in the already established and successful Gotham. Reed has had quite the introduction to the hit FOX show, with her character’s presence rippling through the fictional city, from befriending supervillains to hiring serial killers, posing her as the main antagonist for the first half of this season.

Now halfway through the season, Crystal Reed reflects with us on her time so far in Gotham, whilst also looking back at Teen Wolf.

AC: If you had to spend a day in Gotham, which character would you spend it with?

AC: How familiar were you to DC Comics before landing the role?

AC: Who do you particularly enjoy sharing scenes with on the cast?

AC: What’s it like joining Gotham four seasons in – did you feel like the new girl on the block?

CRYSTAL REED – I did, indeed. It’s always a bit anxiety filled but the cast made me feel at home very quickly.

AC: Looking back at your time on Teen Wolf, do you have any stand-out memories?

CRYSTAL REED – The filming of the pilot for Teen Wolf is a particular moment in time that will never leave me. It was really, very special.

AC: If we go back in time, would you still have left the show in season three?

CRYSTAL REED – Absolutely. Regrets aren’t something I tend to have. I believe they are counterproductive.

AC: There’s so many great anthology shows from American Horror Story to Black Mirror. Would that format appeal to you more with the added flexibility?

CRYSTAL REED – I am a huge Black Mirror fan! It’s a genius format.

AC: What TV Show would you love to guest star on?

AC: Is theatre something you’re looking to get involved in?

CRYSTAL REED – Yes, I would love to get back on stage. It’s such a beautiful way of storytelling and I’m an avid theatre-goer.

Not telling! (It’s so good)

What is your favourite quality about yourself?

Where were you born?

What about your favourite country to visit?

Blister in the Sun – Violent Femmes

I’d love to learn how to box.

I have superb barista skills.

Superpower you wish you had?

The power to inject a healthy dose of common sense into nearly half of America.

The advice to put myself first.

Yup. Two fantastic mutts and two barn owls that I’ve claimed as my own.

A stranger stepping on the back of my flip-flop.

None of that shit really matters.

Gotham Season 4 continues on FOX in a few months.