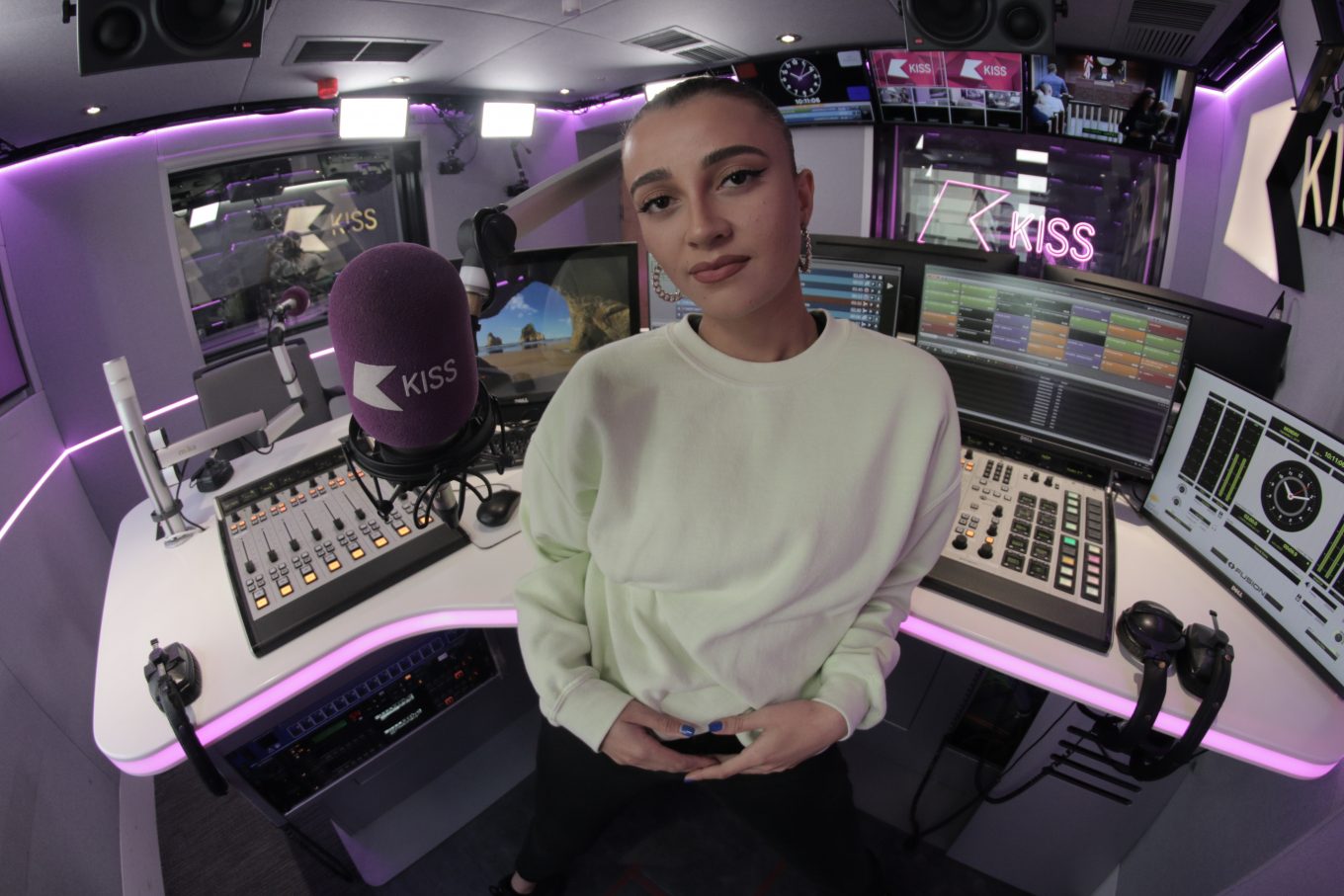 DAISY MASKELL recently became the co-host of KISS FM’s revamped Breakfast Show. Alongside the formidable Tom Green, Daisy leads the national conversation with her abillity to tap into the cutural zeitgeist, aided by her finger-on-the-pulse knowledge and an obsession with pop culture.

AC: Can you talk us through a typical early start for the breakfast show?

DAISY MASKELL: I typically get up an hour earlier than necessary because I need that time to eat breakfast and to get into a mindset that means the sentences I am stringing together at such an ungodly hour are socially acceptable. I get a car in which picks me up at 4:30 and I’ll arrive at the studio by 5:15. The 45 minutes that we have before going on air pay homage to the phrase “every second counts”. On the way into the studio we will all source “of the day” content that we want to talk about on the show that morning and then will pitch it to each other and find a place for it all to fit. You can prep as much as you like but often the moments that are golden occur when the mics go up with little direction. I love live broadcasting. The unexpected leads, the chaotic yet controlled environment…I feel as though its both keeping me young and ageing me catastrophically.

Every morning, you go head-to-head with Greg James on BBC Radio 1 and Roman Kemp on Capital FM. Is this something that you spend much time thinking about?

Firstly, I don’t think I will ever grasp the concept that what I say on air doesn’t just exist within the four walls of our studio. It often feels like the outside world doesn’t exist and I don’t know whether that can be put down to a lack of sleep or whether that’s the way my brain compartmentalises the opportunity that I have been given. The thought of waking up and speaking to millions up and down the country is hard to process. I think it’s best that I’ve mastered the ability to keep the two separate. So I guess the answer to whether I spend my time thinking about Roman or Greg is no…workplace competitiveness is so comical to me. I think you can only stay focused on your own lane. The bigger picture is that we all get to contribute to an industry that we are all passionate about every morning and that’s something that should unite us as opposed to isolating us from one another!

There have been so many huge names on the show this year – do you have any highlights?

The first interview that we did for KISS Breakfast was with David Guetta; we recorded it a week before we launched the show in January. I think the UK confuses him immensely. Unless you are talking about music or Ibiza he will stare at you looking all French and confused, I love it! I tried to explain the concept of beef dripping and he was horrified but equally asked for me to cook him dinner one evening.

What can listeners look forward to in the coming weeks? How can they get involved?

We have the Kiss Haunted House party coming up in October! We will basically be taking over Wembley for the night and those who bag tickets will get to see a load of huge names perform on stage. Halloween is the time of year where I feel like I am in my prime. Is trick or treating classified as antisocial behaviour past the age of 10? I did it last year at 20 and it didn’t seem to be a hit with the neighbours.

Do you have a go-to tune right now?

I cannot move from Normani right now. I feel so guilty that I’ve been sleeping on her and I don’t feel worthy to now say that I am a massive fan! On the weekend that she dropped the video to Motivation I made it my mission to learn part of the dance that she showcased. Listen to me when I say this: save yourself the humiliation of finding out that your leg cannot bend that way! No step by step YouTube video will ever be slow enough to walk you through it. I prayed to God that he had his eyes shut because it was a mess.

Growing up, what were your career ambitions?

I never really transitioned from just “dreaming” of what I wanted to do when I grew up which is why I found the concept of thinking about my future so terrifying. Nothing ever felt tangible and so I could struggled to physically picture myself fitting into any workplace. I wanted to be an astronaut and failing that a Pussycat Doll.

You’re one of the youngest national radio presenters in history – how does that fact sit with you?

My generation is unique in the sense that you are forced to live a life beyond your years but are also free from certain pressures that would have been a catalyst for you to grow up and settle down much sooner. It’s so incredible that I have so much responsibility and opportunity at 21. I’m so thankful to be in a position to actively lay the foundations for a future however I make a conscious effort to still reflect what my friends are in to and up to. I’ll have a crazy week at work but then visit them at University up and down the country on weekends to get the best of both. I think that’s so important. I don’t want to look back at such a key stage in my life and realise that I sacrificed too much of one thing.

What is something you would love to achieve in your career?

I’d love to have a waxwork of myself somewhere around the world. The further afield with less budget spent the better. Preferably one set in Azerbaijan just to marvel at their interpretation.