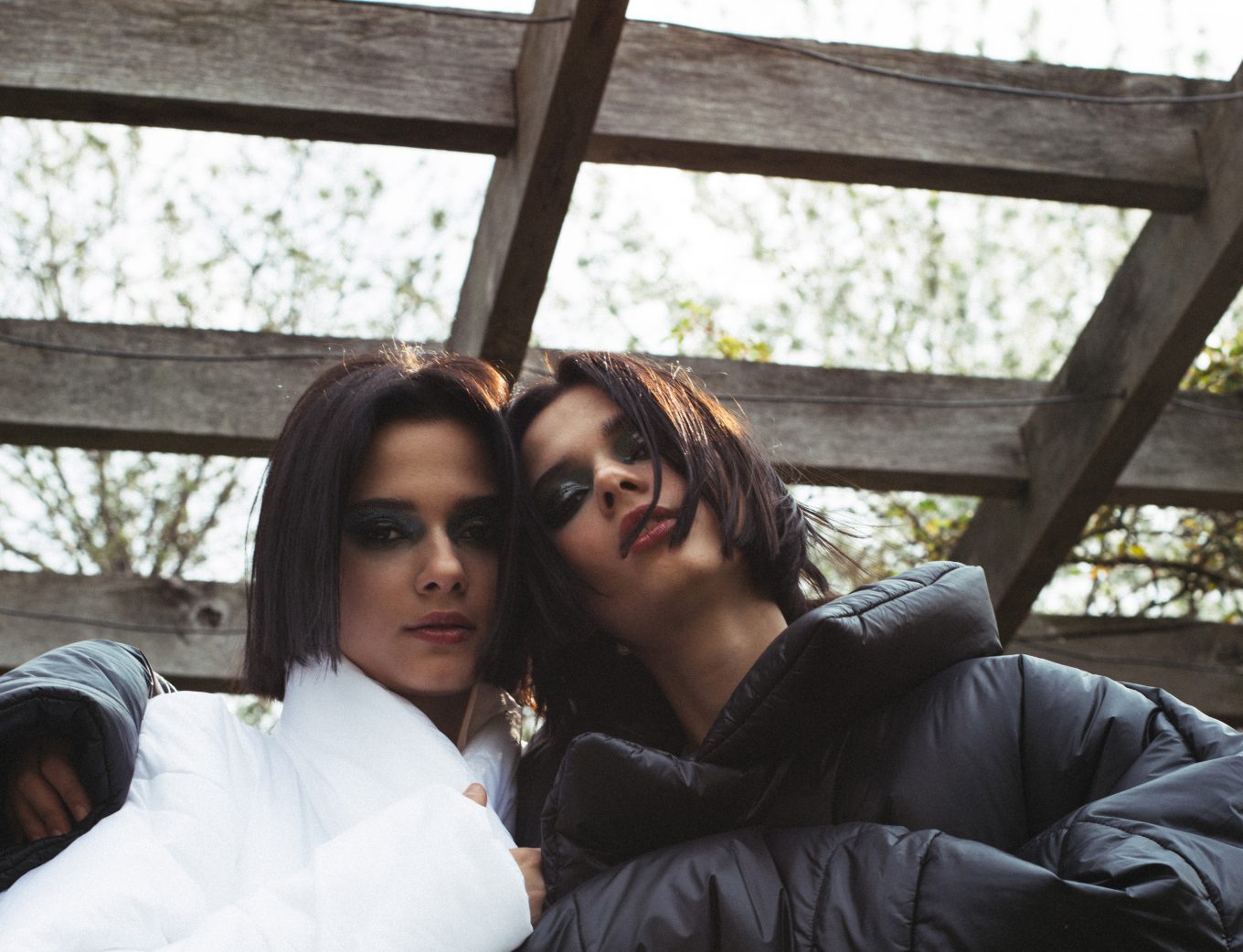 BLOOM TWINS burst onto the scene just six years ago, when they uploaded their first track to YouTube, Fahrenheit at seventeen years old. Anna and Sonia – who are classically-trained multi-instrumentalists – recently released their debut EP Winter’s Tales, after relocating from Ukraine to London.

Blending electronic tracks with haunting melodies, they have created their own signature sound, which they describe as dark pop. After an exclusive photoshoot with the twins, we spoke about Winter’s Tales, Ukraine, London, performing and everything in between.

AC: What is the best thing about being a twin?

ANNA KUPRIENKO: The best thing about being a twin is being able to play tricks on people. Guys used to tell us that we were “so special” yet they wouldn’t see a difference when we would swap. Another great thing is to have a special connection, a special language we speak with no words needed. We would understand when something is off before we even look at each other.

Do you ever finish each other’s sentences?

[Laughs] we so do. People think it’s creepy, we find it absolutely normal.

How does the music culture in Ukraine compare to the rest of the world?

We cannot really compare it, to be honest, as we moved to London when we started our music career. Like every country it has its own flavour.

We had the best childhood – even if sometimes as kids we didn’t feel this way. We spent all of our time in a music school, learning different instruments, music subjects and I just loved sitting in between classes in my headphones, listening to my favourite music. I loved listening to very different styles and I did love classical music too – but not the one we would play in a school.

We were inspired by our parents – they would always play together in a such perfect union that we wouldn’t be able to control ourselves and would start humming along. They loved listening to The Beatles on weekends and I think it was a start for us to begin falling in love with English music.

So music runs in the family?

It definitely does: our mum is a vocal coach and our dad is a flute player and a guitarist. We were drowned in music since we were little babies – we started to sing before we could actually talk.

What are you enjoying about living in London?

We love creativity and how open-minded this city is. It’s multicultural, colourful even when we are having a grey, rainy day. This city is full of different possibilities and there are so much to do, to learn and to experience. It can be quite overwhelming because this city never sleeps – but neither do I!

There is never a rule of how we do it, we just tend to love to do certain things: I love production, Sonya loves coming up with melodies and lyrics.

How do you know when a song is ready to be released?

You never feel it’s ready. Always something you want to tweak.

Do you see your music as an extension of yourselves?

We see music as the core of who we are and everything else as an extension. Music is the unconscious and conscious.

We see inspiration in everything. Could be a love story from a friend or a situation in the world. There is so much happening around the globe, starting from politics and economy, finishing with the global warming, that I don’t think there is enough time to write all of the songs that need to be heard.

On your recent EP Winter’s Tales, is there one song that you have a particularly special connection with?

Nothing ever changes has made a great impact on us. It’s incredibly hard to realise that sometimes ‘I’m sorry’ won’t change anything, but does it really matter? Even though we can’t rewrite what already happened, we can try to be our best selves and take a hit for what has happened, not for us to free ourselves from the guilt, but so the others feel better.

With your new music, who are you drawing influences from in terms of artists?

So many artists that we love and find inspiring across various genres. We currently really like Billie Eilish. Her sound is so original but also so honest. She is young yet really mature. We also love the fact that Billie creates her stuff with her brother, whose production fits with her melodies and lyrics like the jigsaw pieces.

How do you prepare mentally for going on stage at a concert?

We just get in the zone by separating ourselves from the rest of the word, by putting the earphones on. Thinking of our fans and how grateful we are for their support, as nothing would be possible without them. It’s important we show them our love they deserve.

Do you have a favourite place to perform?

Every venue and city are special to us in their own way. So far we can’t pick a favourite one. Playing O2 arena in London, Budokan in Tokyo, or Palace of Sports in Kiev or a small club night in East London are all unique in their own ways. Of course it makes it more special when it’s your own show.

Since the release of Winter’s Tales, have you been in the recording studio?

Who do you dream of one day collaborating with?

Billie Eilish. We will be modest and only pick one.

Is there one particular thing that you’re excited about for the future?

The unknown. As long as we have our fans’ support and do what we love, we will always be happy.