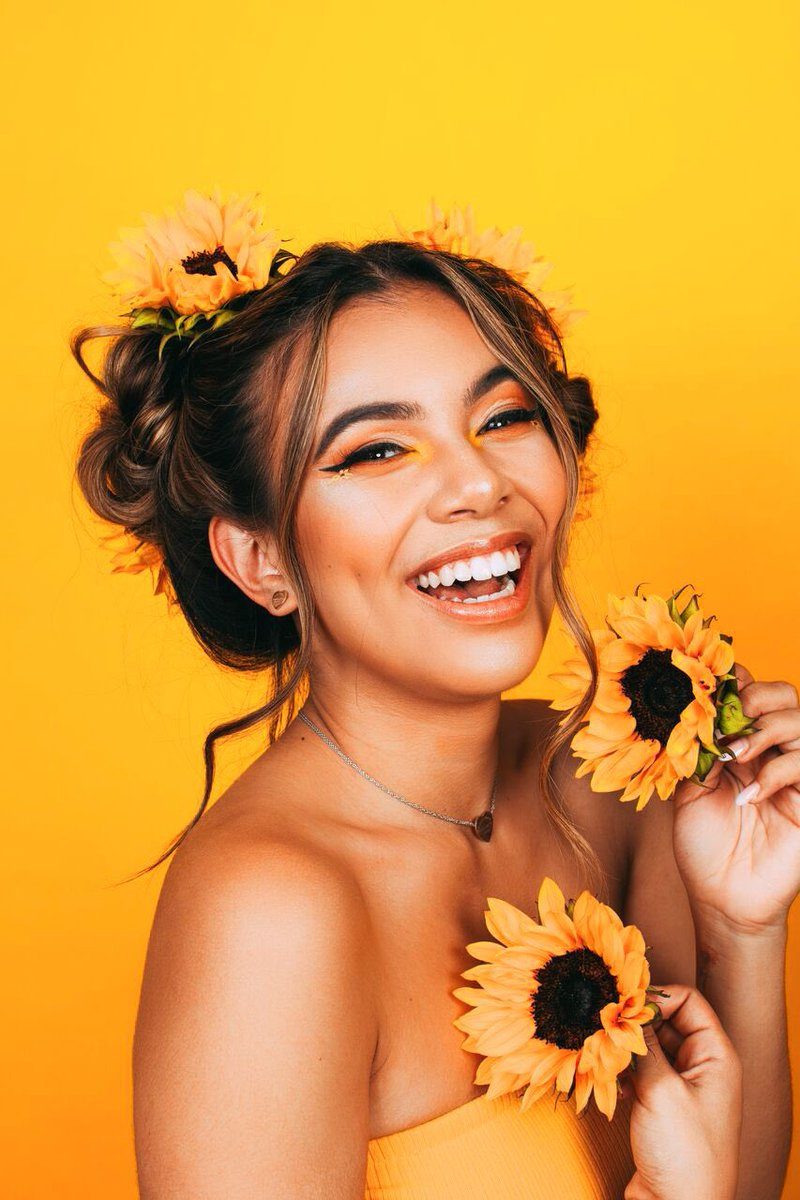 ADELAINE MORIN is at the height of her powers. The Canadian YouTuber, known for her self-taught makeup artistry, has amassed a loyal fanbase of more than a million multi-platform followers. As we head into the new year, we wanted to chat with Adelaine about her journey as a YouTuber, using her influence to empower girls and her ambitions for the future.

AC: Let’s talk about #GirlsSupportingGirls. How long did you work on this project?

ADELAINE MORIN: I launched my #GirlsSupportingGirls campaign June 1st, 2018, so it’s been my baby for almost a year and a half. I decided to focus my efforts on #GirlsSupportingGirls because growing up in high school I dealt with severe bullying from other girls. I’d have false rumors spread about me, cyberbullying online, physically pushed in the halls all by girls I’ve never had a full conversation with. These girls made my high school experience a living hell because they thought we were in competition with each other when in reality the only way us women rise is by lifting each other up.

I had three close girlfriends who I’d call whenever I had family trouble, I needed to talk or just be a crazy teenager with. These girls are the reason I am who I am today. I feel as though in order to appreciate the good, you have to go through the bad. I wouldn’t wish what I went through in high school on anyone, which is why I started #GirlsSupportingGirls; to stop the stigma that other girls are our competition. Never compare your chapter one to someone else’s chapter twenty. Comparison is the thief of joy. Collaborate, do not compete.

Can you tell us any funny stories from on-set filming the music video?

The funniest moment on-set of filming the #GirlsSupportingGirls music video was definitely the courtyard scene with Matt and I. We were supposed to be talking about prom, if Matt was going with anyone and if he wanted to go with me, but in reality he was asking what I wanted to eat for dinner after the music video shoot! He’s such a boy. He’s never filmed a video with production to this extent before, so he was a little nervous but handled it like a champ. The amount of my friends that texted me saying Matt was amazing at acting, I was shocked! At the end of the scene, we concluded we wanted to go to Sushi Roku in Santa Monica. It just makes me crack up because nobody knew that we were talking about food that entire scene.

As a YouTuber, what are you still trying to learn?

As a YouTuber, I feel as though it’s easy to just stay at home and be sad all day. Being your own boss seems like the best job ever (It is, don’t get me wrong!), but there are definitely consequences. You have to keep yourself accountable for doing work, learning, going out and socializing, which seems easy but when you’re lazy like me, it’s easy to stay at home all day and be sad. The first couple years of doing YouTube full-time, I was so excited to be out of school and not have to do homework or learn anything, but as of last year, I realized I love learning.

Learning keeps my brain stimulated, learning keeps me on top of my game and learning has me constantly changing my content. As of last year, I’ve been attending a beauty college in Toronto and I’ve become a certified makeup artist and skin care technician. I’m currently doing a hair course, and love being able to socialize with my friends and learning new skills because Youtube can be a lonely job.

I’ve been wanting to release an app where it connects my YouTube, merch, and social platforms all in one, but apps cost a lot more than you’d think! I’ve been quoted a couple of times and it was in the $50,000 ballpark. Ain’t nobody got time for that! That’s a Tesla! So I’ve been focusing on lightroom presets and doodle presets for my followers to use to edit their photos like mine on their phone. They’ve been asking for them for years and I’m finally close to having it release!

A personal fear I’d like to conquer is doing videos that genuinely make me feel happy and inspired but may not get as many views. YouTube is such a weird and new job, I’d love for a psychologist to look into how it affects our brains and how we live our day to day life because it affects all of my friends in a huge way. Majority of YouTubers hop on a trend because we’re engrained to think that trends grow, get views and expand your audience. Similar to someone wanting a job promotion, YouTubers with more views get paid more.

We think we want to do these trends and that these trends make us happy but deep down we’re creating a fake version of ourselves online to fit a criteria people want to see. I get caught up in trends (and don’t get me wrong, I’m genuinely excited about some of them), but sometimes I find myself asking what I’m doing with my life. I feel no creativity, no passion and no excitement for more. So, moral of the story, I want to start doing more videos for me, that make me happy, and less videos for everyone else, to make everyone else happy. Balance is key for me.

Who is inspiring you right now?

Two YouTubers that have been keeping me inspired recently are Shane Dawson and Niki Demar. Shane Dawson has been pushing the boundaries of YouTube content quality since he started his series videos. From Tanacon, Jake Paul being a sociopath and the beautiful world of Jeffree Star, I had my YouTube refreshing whenever he released a new video. I feel as though he is one of the first YouTubers to treat YouTube as a TV show with connecting episodes, seasons and cliff hangers. He is a huge inspiration for my upcoming series about mental health I’ve been working on for over a month.

Niki Demar is one of my closest YouTube friends and is one of the most creative girls I know. Her content on both her twin channel and personal channel is so creative, raw and entertaining. My favorite series of hers was her Truth About series, where she interviewed YouTubers about mental health and breaking the barriers between them and their subscribers, stopping the stigma that mental health is a taboo thing to talk about. Between Shane and Niki, I love the creativity of my subscription feed. Love me a Cancer and a Taurus!

Social media is my life. I know people may think that’s a bad thing when I say it, but I think everything in moderation is good. Obviously having social media as my job, I’m on it more than the average 21-year-old. Social media allows everyone no matter their shape, size, skin color or class to have a voice and express themselves. My favorite thing to do is go on Pinterest and search up a “mood” for inspiration and creating a photoshoot around that mood. Millennials express their artwork, makeup, sports, views, beliefs and anything they want on any social platform. It’s an amazing way to stay connected, informed and can also be a huge waste of time. I love it though.

Do you have any thoughts on Instagram hiding likes?

I personally don’t like the fact that Instagram is hiding likes. As a Canadian, Instagram decided to test out this feature on us first and I went from having an average of 100,000 likes to as low as 30,000 likes. That’s a 70% drop in engagement since they removed the likes. I think this is because as a follower, I get excited when I’m one of the first likes or comments. Without the numbers, followers don’t feel the urge to engage or like a post. I don’t think it’s the numbers on Instagram that are causing bullying, I think it’s the comments. From an influencer perspective, it’s also going to be harder to get brand deals, as brands won’t be able to see how a post is doing or which influencer is worth their promotion. You could have a million bot followers for all brands could know.

I want the world to be filled with a bunch of informed, forward-thinking millennials that care about the environment, it’s cool to be eco-conscious, and education is easily accessible online. Vancouver recently took a huge step forward and banned single-use plastic items such as plastic straws, cups, containers, etc. I would like the entire world to make small changes throughout their daily life to be more eco-friendly. I’m not the most eco-friendly person in the world, but as an Aquarius, it affects me a lot.

If I had a chance to put something on billboards worldwide next week, I’d have my #GirlsSupportingGirls campaign. My company, @ShopAdelaineMorin, on Instagram donates a portion of each sale (We sell hoodies, joggers, scrunchies, mini backpacks, reusable straws and much more) to a girls non-profit organization. We recently donated $10,000 to breast cancer research and $10,000 to ovarian cancer research this season, and I’d love to make a bigger impact!

I also would like to stop the stigma that girls are each other’s competition and have to tear each other down. Growing up in high school, girls would physically push me in the halls, talk behind my back and call me names, when in reality the only way us women rise is by lifting each other. I also released a #GirlsSupportingGirls song and music video live on my YouTube channel! It’s my favorite video I’ve ever made in my life.

The funniest fan request I’ve ever received was an Adelangel asked me if we could go on a dog park date. My fans know how much I love my Frenchie, Blue, so they know I’m always down to go out with her. Unfortunately, it wasn’t able to happen, but I always make sure to give back to my fans as much as I can as they’ve given me everything. I throw launch parties for them, I include them in my #GirlsSupportingGirls campaign photoshoots, I go to their houses and do their makeup for prom and anything I can squeeze in my schedule. My Adelangels are my little online family. They’re so supportive, I don’t know what I did to deserve them.

I haven’t thought of my New Year’s resolution for 2020, but my goals by the end of the year are:

✨Post my first series on my YouTube channel.
✨Buy a condo in Toronto.
✨Send over my visa application for the US.
✨Focus on me, my mental health and what makes me happy.

I hope these goals are achieved by the end of the year, or else we’ll have to make it a New Year’s resolution for 2021!