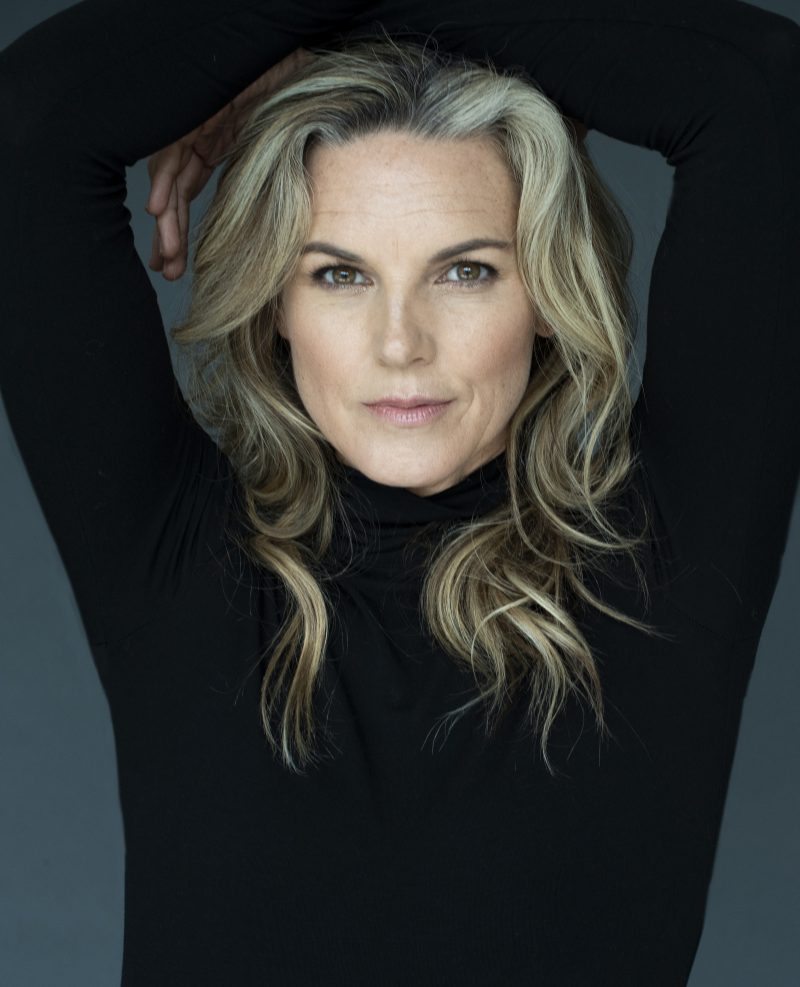 KATE DRUMMOND is currently starring in the new Hulu original series Utopia Falls, a coming of age story following a group of teens in the distant future colony of New Babyl as they uncover an ancient forbidden archive of historical, cultural and musical relics.

In the series, Kate plays the role of smart, cunning, and manipulative Authority Phydra, who is the head of New Babyl’s police force and is a staunch believer in upholding the law, order, and above all – the status quo.

KATE DRUMMOND: I think audiences can expect to be highly entertained for starters! It’s a very unique show that is visually stunning, with characters who are quirky and compelling and storylines that get really intriguing as the series progresses. It combines culture, politics, music and dance, fashion, self-expression, love…all within a sci-fi utopian setting.

Can you give us any teasers about what is in store for Phydra?

I can tell you that fans are saying that “Phydra’s hair gets higher and bigger as she gets more evil!” But I don’t think this was on purpose! [Laughs] Phydra is a complicated antagonist who stands in the way of our young heroes as they start to stray from the cultural norms of New Babyl. She believes strongly in the values of New Babyl, and wants nothing but peace and loyalty. She’s a passionate woman who does questionable things to ensure that the integrity of her society is not compromised. But, every villain has their kryptonite and near the end of the season, we start to sense what Phydra’s might be.

“Well, that was a long road for a short answer but who doesn’t love a good yarn…”
and “Hey.”

There were so many funny moments!  Every time the Tribunal got together, we were always cracking up in between takes. I think because we were always so serious in our scenes. Alex Castillo (Diara) had to sit on this cushion on her chair and it always made these toot noises and of course, we’d all get the giggles. Sounds so immature, I know, but seriously, when you get 5 adults together, the giggles are contagious. Another funny moment was when I tried to learn one of the dances that the Exemplar candidates were doing and ended up looking more like Elaine from Seinfeld.

If I don’t look ahead to see how many pages are left!  Also, if when I read it, I can really hear the characters talking and I can see the story come alive in my mind.

I’m still learning how not to worry about all the other stuff going on around me on set that has absolutely nothing to do with me. I mean, sometimes the stress level gets really high when filming because everyone knows we are on a schedule and there’s a lot of people involved in each shot. I’m sensitive to the energy around me, so I’m learning to better block it out and focus on my own job.

I think back in 2012, just shortly after I left my teaching career to pursue acting. I had booked two roles around the same time that were really significant experiences for me, for different reasons.

The first was when I booked the lead female role of Anna Grimsdottir in Splinter Cell: Blacklist. First of all, I knew it was a big deal because I knew of the Tom Clancy legacy. It was also Ubisoft’s first AAA video game to be made using full performance capture and so the entire cast was basically the first cast to use the new technology. I felt like I was really coming in at the ground level and that made me feel like there was going to be a future in video games for me. It was also the first big gig that had consistency and longevity in the work schedule. It was pretty consistent work for me for the better part of two years and that made it feel like I could make a living from acting.

The second experience that made me realize that acting was going to be my career, was a smaller role in a movie called Clara’s Deadly Secret which was directed by one of my favorite directors to date, Andrew C. Erin. It was the first time I’d played a role that was so deeply emotional and weighted. The scenes were heartbreaking scenarios. I remember looking over at my director and some of the crew after one of the scenes, and people were discretely wiping their eyes. It was very surreal. It was a really profound moment for me where I realized that I truly could impact people with my work as an artist. Before I wrapped, I remember Andrew thanking me and telling me that I had really affected him with my work. He told me he saw “leading lady” in me and something about that, and about working with him, really landed for me. I knew I was meant to be a storyteller. I was designed to be a leading lady and I was going to make a career of it.

It’s a love-hate relationship for me. I love social media for the way that it connects me with the fans and connects me with other artists. When you can talk with people whom you’d never have a chance to interact with otherwise, it just closes the circle and makes the whole industry feel a little more intimate. I always say that my fans are like family. My fam-dom. I love them and they make me love what I do even more. But, I also don’t like social media because of the inherent comparisons that it brings up… for all of us. I’m not immune to that comparison game and it’s really tough. I also see too many tragic stories online and it really affects me. I’m so sensitive so if I happen to see something upsetting, I will take it with me to bed and lose sleep over it. Sometimes I wish there was just a ‘good news-only’ channel, but I also know that without the knowledge of what’s going on in the world, we can’t endeavor to make it better.

If I tell you, then someone will steal my idea!

I don’t know that I am afraid of anything in front of the camera. Oh, maybe asking for another take if I don’t feel like I’ve done what I wanted to do, completely…even if the director says it’s good.

I’m in pre-production for a beautiful feature film called Healing Hearts that’s set to film in Utah in early fall and I’ll also be traveling a lot this year for Wynonna Earp conventions. Outside of acting, I’m working on finishing my kids’ book and would love to get one of my scripts to camera. Other than that, the next project is always just around the corner! Fingers crossed for a Season 2 of Utopia Falls!

Actually, I’m very excited to see what flowers are going to come up in my garden this spring! I just bought a house and moved in over the winter months, so I have no idea what’s in my garden! I’m also very excited to visit Germany and Scotland this year because I have never been and both places are in my family heritage.