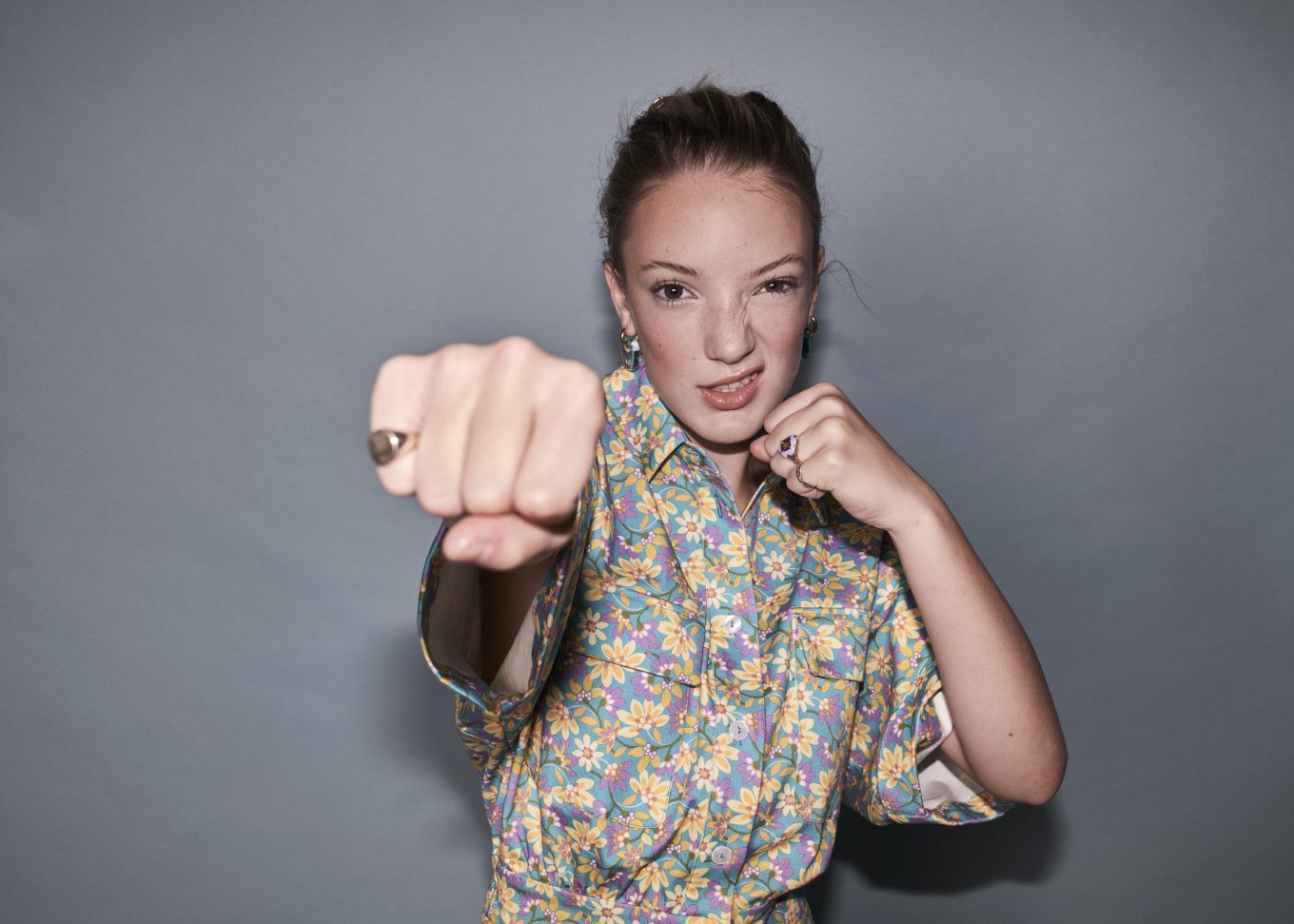 RAFFIELLA CHAPMAN can currently be seen in the new film Vesper.

We caught up with Raffiella Chapman to talk about her latest role and career so far.

AC: What can audiences expect from Vesper?

RAFFIELLA CHAPMAN – Vesper is a coming-of-age story with a very timely ecological theme. Vesper, uses her knowledge of genetic biology to try and escape the bleak world she lives in. It’s a sci-fi film but an unusual one that breaks with many traditions of the genre. The audience can expect a fantastical, fairytale world beautifully realised on screen by the directors Kristina Buozyte and Bruno Samper.

RAFFIELLA CHAPMAN – Vesper is a thirteen-year-old girl trying to survive in a post-apocalyptic world while taking care of her paralysed father but ultimately she wants a better life for them and won’t stop until she gets it. She feels this internal anger about the disparity of wealth in her society. She uses that anger at the injustice to drive her towards better things. She’s also a symbol of hope for the future of the planet if we could all just be a little more Vesper!

RAFFIELLA CHAPMAN – There’s a scene where I have to catch the drone when it falls out of the air and on my first take I dropped it. Thankfully we had a couple of spares! On the day we wrapped, the producers surprised me with a gift of one of the drones. I had to try and get it home the next day, mid-lockdown and already over my luggage allowance! Thankfully, the airline was kind enough to help and it has pride of place on my shelf of movie-making memorabilia!

RAFFIELLA CHAPMAN – Everything I possibly can. I don’t think you ever stop learning. Every time I work with a new director or a new actor, I learn something new and those experiences and the advice I’m given are gold dust for me. I try and glean as much as I can from every experience and bank it to take into the next project.

RAFFIELLA CHAPMAN – I know a script is great when I can’t put it down, I want to keep reading to the very end and I’m gripped just the way I am with a really great novel. I love scripts that have something important to say without being didactic. Vesper carries an important message about ecological matters, about hope and resilience but it’s also entertaining with great action sequences, beautifully drawn characters that feel fresh and authentic and the most incredible world-building. A script that achieves all of that is unquestionably a great script.

RAFFIELLA CHAPMAN – My first career goal was to be a palaeontologist as I’m incredibly geeky when it comes to science! I actually started acting just for fun when I was very young but I’ve gradually come to realise it’s what I want to do as a career. Shortly before I was cast as Vesper I had this realisation that acting was the only thing I really want to do in my life, it’s where I feel happiest. It’s a huge challenge in so many ways but I thrive on that challenge and love creating something special as part of a team.

RAFFIELLA CHAPMAN – I think it plays a key role in promoting film and television and can allow the audience to engage directly with actors and creators but I personally spend very little time on social media so outside of work I don’t see it as something that’s important in my life. You are more likely to find me reading or hanging out with friends in real life than chatting online.

RAFFIELLA CHAPMAN – That my friends, family and the people I love are the most important thing in life and more precious than material wealth or fame could ever be.

RAFFIELLA CHAPMAN – I would love to see an app that calculates your carbon footprint and suggests how you can reduce it!

RAFFIELLA CHAPMAN – Rewatching classic Disney movies like Cinderella or Tangled reminds me of my first feelings of love for cinema. Also, I’m a sucker for a good Christmas movie and Muppets Christmas Carol never disappoints.

RHIAN BLUNDELL is currently starring in Vampire Academy on Peacock. We caught up with Rhian Blundell to talk about her new role. AC: What can..
Read More