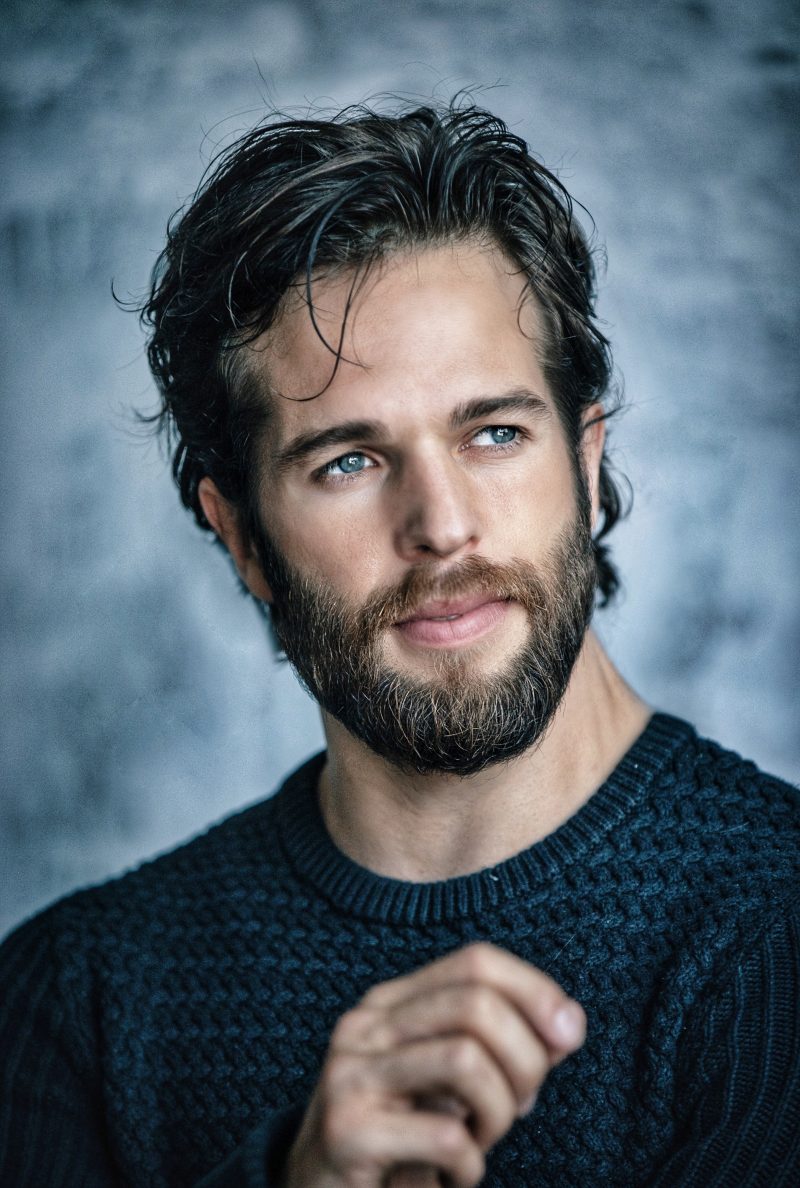 Actor ERIC HICKS who stars as Will in the new romantic feature film Love in Harmony Valley set to make its premiere this October on the Superchannel. You can view the trailer here.

AC: What can audiences expect from Love in Harmony Valley?

ERIC HICKS – This is a feel-good, uplifting, family movie for all ages. It deals with how we adapt to the changing times and learning how to open our hearts and forgive ourselves and others for past misfortunes. There are lots of laughs as well as moments for self-reflection. But in the end, it’s about being there for one another. We all need support. And love is in the air!

ERIC HICKS – I play the lead opposite Heartland’s Amber Marshall. Through an unfortunate series of events, I’ve been dragged home to our small town of Harmony Valley to take care of my injured sister Tracey (Nina Kiri). In the meantime, my best friend Flynn (Andy Yu) and I assemble plans to revitalize our hometown but we won’t be able to do it alone so I go about recruiting Emma (Amber Marshall) to help us make this dream come true. In the end, I walk away with more than I ever could’ve bargained for.

ERIC HICKS – Will wants nothing more than to protect his sister and his hometown. Will is a long term visionary and through his revitalization plans, he aims to ensure everyone will be able to thrive for decades to come.

ERIC HICKS – One day on set, we had animal trainers bring a bunch of goats, bunnies, cats, and a pony to set for this one scene. Well, you can imagine it was tough to coordinate that many animals at once. We ran the rehearsal without the animals but come our first take they were all let loose at once and it was hysterical. Luckily the dialogue supported some crazy animal antics but as the scene went on the goats were tearing down all the plant decorations and knocking over props. At one point, I’m standing there and the actor Martin Roach playing Felix walks out with this pony which was ALMOST too much for me to handle, just the oddest scene ever, but then as I’m grooming the pony the goats thought it would be fun to jump off the side of him and do 360’s and it was absolutely hysterical. I broke so hard. I started having a laugh attack and it was contagious, everyone on set started laughing behind the camera as the director tried to keep us focused and finish the scene, I couldn’t do it though, we had to call cut. It’s all on camera somewhere too. I told the director (Justin Dyck) we need to put that in a blooper reel whether or not that’ll happen I don’t know but it was the funniest thing I’ve ever seen in my life!

ERIC HICKS – I’m constantly working on bringing a scene to life by having a “coming from” moment before and somewhere I’m going to at the end of the scenes so the camera is essentially able to catch that specific moment for the scene but in my mind, I don’t know when it starts or stops and I sort of trick myself into living it for real. It takes a lot of prep work to get that kind of naturalism from script to screen but the goal is always to leave the audience wanting to follow my character at the end of the scene to wherever he’s going next. Really cool stuff.

ERIC HICKS – Well, it always has to do with the flow of dialogue. If it’s well written, it’s easy to remember because it just feels so naturally like the way we speak day today. When a script isn’t well written it takes ten times the amount of prep work for me to bridge those holes in the script so to speak and make the transitional moments within a scene flow seamlessly which sometimes truly just feels impossible. I remember hearing an Oscar-winning actress say once, “Oscars should be given to people who can make bad scripts great. Anyone can make a great script great, that’s easy. But to make a bad script great, that deserves an Oscar.”

ERIC HICKS – Well, I used to be a prosthetist, artificial limb maker, before pursuing acting and I didn’t feel challenged enough. It wasn’t something I wanted to do for the rest of my life, so when opportunities presented themself to sign with an agency and pursue acting, it was an almost instantaneous yes from me. I didn’t care about money. I knew it would be a lifelong journey for me with lots of ups and downs and so I was prepared for that road before committing to acting. It took me 7 years of full-time training and non-union work before I ever got my first union credit so that resiliency had already been built into me to handle rejection on a mass scale. But I always just said to myself, “patience and persistence.” Everything works out in the end, just don’t stop growing.

ERIC HICKS – I’ve always had such a utopian dream for our planet. One where we live in synchronicity with the planet. A true balance. For that to be possible, certain things need to happen. In 10 years, I would love if we as a human species were able to deeply understand our place in this universe and to have perspective on what “life” truly is and isn’t. To be humbled. To understand we are not superior but are equal to everything else. And then to act accordingly. I see veganism as a great start for our planet. To respect all sentient beings, that is, beings with a nervous system capable of feeling pleasure and pain. To follow our roots and reconnect with mother nature. To slow down, and reflect on what truly matters. The things that I feel are most important seem to be most neglected in our society. These small changes would have a drastic effect on the way we live and the health of our planet and our future as the homo sapiens species.

ERIC HICKS – “Vipassana Meditation.” I feel that if we are to have any hope of big change on our planet it’ll begin by being aware firstly of our egoic mind. If we aren’t aware of the egoic mind running the show then it simply runs us. To be aware is to take away the ego’s power. Equanimity, to neither crave nor avert. To be equanimous. Powerful ideas right there.

ERIC HICKS – I can see how social media can be an illness of comparisons and to make others feel less than. I understand it’s part of being an actor in the spotlight so when I do make postings, for the most part, I try my best to impart practical advice that can help others feel better and not worse through comparison. For the most part, I try to minimize my participation in social media but see the relevance it has in today’s society and so I have fun with it when I do use it.

ERIC HICKS – I would love to have a VR app that could take you into anyone or anything else’s POV. Like, you could experience the life of a squirrel, or a cow, or a plant, or someone from a different culture and this in return would develop empathy for all things. A deep understanding of all things. I think that would be rad!

ERIC HICKS – I’m still caught up in other people’s opinions of me, unfortunately. I care what others think and want everyone to like me even though I know that’s not a realistic goal. But I love everyone and everything, the good and the bad, you just can’t have one without the other. To not crave others’ love would be liberating. I’ll get there…eventually.

ERIC HICKS – Equality. I love seeing the world making progress in this aspect. Obviously, there will be struggles to get there, but as we’ve seen women’s rights improve and gender rights and racial equality, so we’ll see animal rights and earth rights and so on. One thing leads to another and it’s all for the betterment of the planet. I’m excited to see these changes happening, it gives me hope for our future.